The Walking Dead Season 3 Episode 8 “Made To Suffer” Review 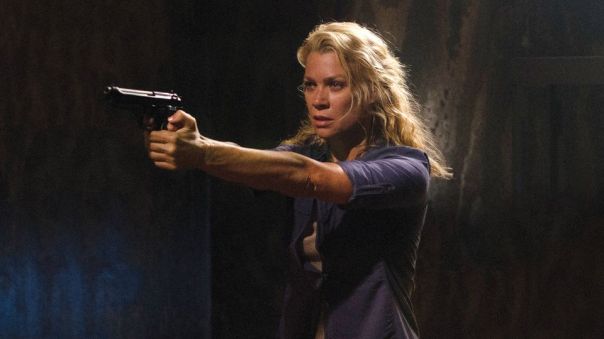 The prison gets visitors, Rick leads the mission to rescue Glenn & Maggie, Michonne faces off against the Governor, and the Dixon brothers reunite in the mid-season finale of The Walking Dead Season 3 Episode 8 titled “Made to Suffer”.

I haven’t read the comics yet because I like not knowing what might happen on the television show. I do know that Tyreese is a fan favorite character so it will be interesting to see how he changes the group’s dynamic.

My first impressions of Tyreese is that he is formidable, level-headed and noble. He has a compassionate heart for letting the woman who got bit by the walker into the prison. If Rick was to make the decision he probably would have killed her on the spot.

Carl has become a bad-ass. He leads Tyreese’s crew to safety and wisely locks them up. The look on their faces is of bewilderment as they watch a kid that comes out of nowhere to shoot walkers in the head, basically rescues them and takes charge.  I liked how Tyreese referred to Carl as “the man”.

Glenn is really resourceful for making a weapon out of a walker’s arm bone. I’m glad that Maggie confirmed the Governor didn’t violate her, no one should have to go through that. These two aren’t sitting around waiting to be rescued, they’re taking charge of their predicament.

In the same way that T-dog was replaced with Oscar, it appears Oscar is expendable since Tyrese is joining the cast. I actually liked Oscar but there had to be a cost in rescuing Glenn and Maggie.

The gunfire was pretty intense. There were a lot of casualties on the Governor’s side. Will this weaken their resolve for revenge or will they risk going to the Prison .. and get their asses kicked again? And why did Rick hallucinate he was shooting Shane?

The Governor starts out this episode trying again to connect to any remaining humanity in his undead daughter. The Governor is a wicked man but if he has one point of weakness, it is Penny. We also get another look at the floating heads in the fish tanks. The Governor, if he can be taken at face value, explains he forces himself to look at them to prepare him for the horrors on the outside.

Michonne returns to the Governor’s residence, waiting in the dark like a boogeyman. She’s looking for payback after the Governor sent Merle and other henchmen to hunt her down like a dog. Michonne only sees a brain-dead monster in Penny, telling the Governor in an ice-cold tone, ” She doesn’t have needs”. My kill of the week is the katana blade coming out of Penny’s mouth.

The image of the Governor with a shard of glass in his eye, clutching his dead daughter and sobbing was harrowing. With Penny dead, the Governor’s emotional ties to the life before the outbreak has been severed completely.

Andrea seems to be so infatuated with the Governor that the severed heads, Penny, and the showdown with Michonne are not enough for her to realize there is a disturbed and homicidal side to the Governor. If only Michonne had said something like, “He sent men to kill me after I left.” Andrea might stop seeing the Governor through rose-colored glasses.

When Michonne reunited with Rick at the end of episode, there was a noticeable vulnerability in her demeanor. After all those months with Andrea, she doesn’t want to be alone again. Which is why she tells Rick she would be useful in rescuing Daryl or escorting them back to the prison.

I’m glad Rick was talking some sense into Daryl that they would come back later for Merle. But there’s a part of Daryl that intentionally wanted to stay behind to reunite with his brother.

At the rally, the Governor was fairly manipulative in making the citizens of Woodbury feel afraid, reminded them of how unsafe their community has become, and then incited blood lust against the terrorists.

Channeling Woodbury’s need for swift and decisive justice, he found the perfect scapegoat in Merle. Merle lied about killing Michonne and betrayed the trust of the Governor. The Governor didn’t bother asking for an explanation or to hear Merle’s side of the story, unless it happened off-screen.

I didn’t imagine the brother’s reunion to go down like that. It’s hard to know exactly what Merle is thinking, but he might be more concerned for Daryl than for himself.  I hope that both brothers live for a little while longer because I want to see how their relationship plays out. It would be a shame if we didn’t get to seem them have at least a conversation before one or both of them dies. Will Andrea jump in and plead for Daryl’s life? Will Rick mount another rescue?

The second half of Season 3 of The Walking Dead will return on Sunday, February 10, 2013.

What did you think of the introduction of Tyreese? What did you make of Rick’s hallucination of , I mean Shane. Did the reunion of Merle and Daryl live up to your expectations? What’s your favorite moment(s) from the first half of Season 3?