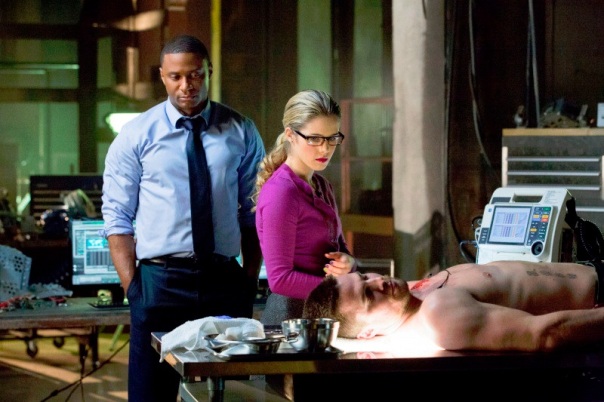 In “The Odyssey”, Oliver turns to Felicity for help after he is shot by his mother. On the island, Oliver attempts a dangerous mission to escape with his new mentor, Slade Wilson (aka Deathstroke).

Two pieces of great news for Arrow fans this week. Firstly, Arrow was renewed for a full 22 episode second season by CW. Secondly, this week’s fantastic episode focused almost entirely on the island, something I’ve been yearning for especially after “Betrayal” introduced us to the dangerously cool Slade Wilson and his quest to escape Purgatory with Oliver’s help.

The show’s producers could have easily interspersed flashback scenes of Oliver training with Slade and their mission to hijack a plane across several episodes. The problem with that is it would have been much harder to suspend our disbelief that Oliver might get off the island so early in his origin story even while knowing he didn’t spend all of the last five years there. Also, it’s unlikely Slade would escape the island either because it’s fairly apparent he’s one of Oliver’s mentors and Oliver needs a lot more training in becoming the deadly vigilante we know in present day Starling City.

Because of the episode’s quick pace and intensity, I was completely absorbed in watching the story play out rather than distracted by the improbability of Oliver escaping the island. Before the first commercial break Moira shoots Oliver, Felicity discovers Oliver’s secret identity and Oliver steps on a landmine as soldiers quickly approach from behind. Pretty impressive opening, wouldn’t you say? Thinking of changing the channel or going to the bathroom? Think again.

Slade Wilson’s Wolverine-esque berserker barrage on the soldiers as Oliver crouched over the landmine is shockingly awesome. The show down between the other Deathstroke (aka Billy Wintergreen) was not up to the level as the first fight with Yao Fei but it did end with an alarming dagger to the eye. I’m guessing we haven’t seen the last of Billy Wintergreen; besides, Oliver still needs revenge for getting tortured.

As much the fights and action scenes are thoroughly engaging, it’s the chemistry between Oliver and Slade that made the episode gratifying. Actor Manu Bennett finds the right balance at disparaging Oliver while remaining likable and even funny. Their personalities and strengths compliment each other so that they are stronger together than alone. Oliver recognizing the quote from the Odyssey was a great intense scene which showed he wasn’t as thick-headed as Slade presumed. It also was a nod to a literary allusion about Odysseus’ journey home and “stringing a bow” to prove his worth.

In one of the scenes that stopped to take a break from the action, Slade explained his history with Billy Wintergreen, the partner that betrayed him. This bit of exposition informs Slade’s belief that everyone lives for themselves which is why he was so quick to leave Yao Fei to die. However, when Oliver couldn’t leave behind a friend, it made Slade realize he’d be just like Billy Wintergreen if he abandoned Oliver to die on island. It’s a neat character arc for Slade to change his belief due to Oliver’s positive influence – this made the episode more than about just guns and explosions. 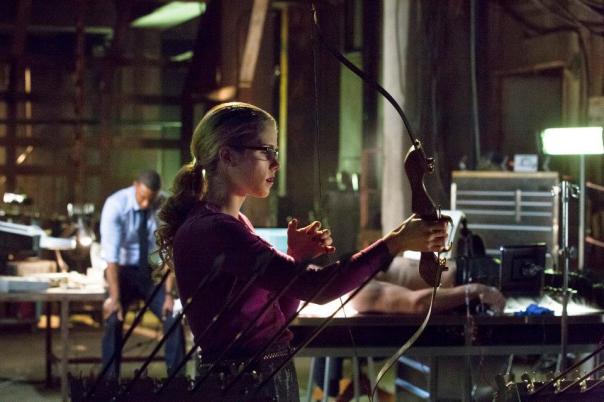 » At the end of last episode the Hooded Archer (can we just call him Green Arrow?) ended his connection with Laurel – at least for now. Of course, Oliver’s star-crossed relationship with Laurel will potentially be the emotional cornerstone of the show. With that in mind, it’s good this episode demonstrated Oliver’s deep affection for her, including the phone call, which is something we haven’t seen enough of in the present day, especially with Laurel dating Tommy.

» Manu Bennett was fantastic again. Looks like he’s doing all of his own stunt work and is completely believable as a sword wielding assassin. I’m looking forward to his new found partnership with Oliver and in what direction his character will evolve.

» What happens when you get two of the most likable characters – Diggle and Felicity together in scenes? They play off of each other very well and she’s seems like a natural fit as Oliver’s brainy sidekick. I love how Felicity brings up the energy drink in a syringe – “I’m not that blonde”.

» Shado, daughter of Yao Fei, will be closely intertwined with Oliver judging by their shared tattoo.

What did you like or didn’t like about this episode? What did you think about the introduction of Shado? Does Oliver believe Moira is innocent or is he afraid to discover the truth?