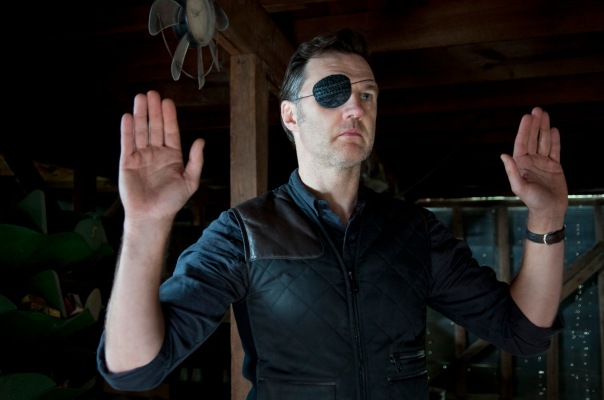 In Season 3, Episode 13 titled “Arrow On The Doorpost”, Rick meets face to face with the Governor for the first time.

The cold opening with Rick and Daryl scoping out the barn was well done. I thought they were scavenging for supplies … only to find the Governor inside waiting for them. If you watched the previews, you knew it was coming.

Rick is in a vulnerable state of mind to be negotiating with the Governor. The Governor is using all of his Jedi mind tricks to test and see how far he can manipulate Rick.

From seeing if Rick would put away his gun, demanding his surrender, plying him with Whiskey and bringing up that Shane is the father of Lil Ass Kicker, the Governor thinks he’s a tiger playing with a mouse.

Because the Governor has a hidden gun under the table, there’s a palpable tension that a shootout might break out any moment. Even before the talk, I was thinking, “Rick, just shoot him” although it might risk the lives of Daryl and Hershel waiting outside.

The Governor is lying throughout the entire negotiation yet his delivery is very believable. The Gov did tell the truth about the day his wife died in a car crash. The story about the loss of a wife unsettles Rick, setting up the Gov’s final deal.

Because Hershel needs crutches to walk, he’s an unlikely right hand man to bring to a negotiation that could easily turn sour. He did get in a funny line talking to Milton The Butler, “I just met you, at least buy me a drink first”. If the two met under other circumstances they could possibly have been friends.

The same goes for Daryl and Martinez. My kill of the week goes to Daryl throwing the knife into the walker’s head. Pretty bad-ass in an action lite episode.

After their walker killing contest, the two henchmen bond over cigarettes. “They’ll do their little dance,” Martinez says, but eventually “they’ll give the word”. Even while bonding, they know they’ll have to kill each other down the road.

As for Andrea, she wants to be a peacemaker but gets thrown out of the meeting … thank you! Outside, Hershel tells her that Governor is a sick man for what he did to Maggie. Andrea is done with the Governor but knows she can best stop him by returning to Woodbury. 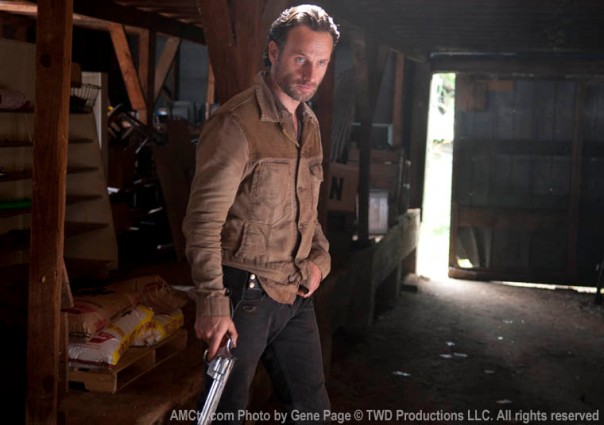 Back At The Prison

A few episodes ago, Glenn was all too eager to get revenge on the Governor with guns blazing. Now he’s starting to think things thru when he won’t let Merle endanger the negotiation.

“This guy cops a feel of your woman and you pussy out like this?” says Merle. It was only a matter time before Merle’s mouth started running again. His motivation is to protect his brother Daryl so it’s understandable why he wants to leave.

After his skirmish with Merle, Glenn’s brief words with Maggie gets them all hot and bothered. I thought Maggie might get flashes of her abuse when getting down with Glenn but finally all is well between the couple.

As much as Michonne would love to assassinate the Governor, she’s not going to risk lives and her place within the group by teaming up with Merle, the man that tried to kill her, of all people.

We Are Going To War

The Governor gives his terms … one woman for all the lives back at the prison. If Michonne didn’t bond with Rick and Carl last episode it would be easier to consider giving her up.

The moment the Governor returns to Woodbury he reveals his true plans to slaughter Rick’s group … except for Michonne. I can only imagine the things he’d do to her.

The Governor lying to Andrea is not surprising. I liked how Rick didn’t tell the group about the Michonne deal. “He wants us dead”, says Rick. It’s a lie, but they don’t know how true it really is.

Rick needs to make the decision for the group, it can’t be put to a vote. Besides, Michonne will freak out if she knew the truth.

From Rick’s perspective, should he give up Michonne? Hell no. He already suspects the Governor is planning to kill them all. Perhaps he doesn’t trust his decision making because of his mental state?

Watch cast and producers thoughts on Inside Walking Dead Episode 313:

What did you like or didn’t like about this episode? Did the first meeting between Rick and the Governor live up to your expectations? Did Rick do the right thing by lying to his group (except Hershel) at the end?