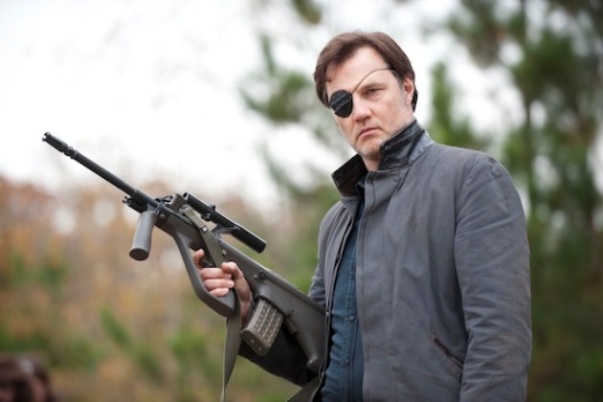 In The Walking Dead Season 3 Finale, Episode 16 titled “Welcome To The Tombs”, the Governor attacks the prison and goes crazy!

You Kill Or You Die

When the finale is as highly anticipated as this, especially after a great penultimate episode, it would be difficult to meet expectations. There were some memorable moments but I wouldn’t go as far as to say this was the best episode of the season.

Andrea is not compelling or likeable enough make her death the emotional centerpiece of a season finale. It’s one thing to see her outsmart the Governor in “Prey” but having her tied to a chair for the entire episode just made me feel relieved it was over and that she got a decent farewell. More on her death later in the recap.

“You kill or you die … Or you die and you kill” is the narrative thread through-out the Season 3 finale as we see multiple characters, including Milton and Carl, decide whether or not to abide by this code.

Milton gets a final moment to define his character by attempting to kill the Governor instead of Andrea. The more Milton stands up against the Governor over the last few episodes the more I have slowly warmed up to him.

There’s a good moment when the Governor’s acknowledges to Milton that Penny would be afraid of him. One way to look at it is he’s transforming himself into the man who could have saved his daughter as horrific as that may be.

The prison assault did not unfold as I expected but it was still exciting to watch. If Rick’s group went to toe-to-toe with the Governor’s firepower they would have been blown to smithereens along with the watchtowers.

I assume leaving the bible with the highlighted scripture for the Governor was intentional and a nice touch … compliments of Hershel?

The OMG moment of the episode that I did not see coming is the Governor massacring the Woodbury people. If they only knew who the Governor really is they probably wouldn’t have mouthed off.

Stupid Allen, if you’re going to point your gun at the Governor you better pull the trigger before he does. I wish we got a hint at what the Governor’s next plan of action is if only to leave me anticipating his return next season.

Has Carl gone crazy or is it just zombie apocalypse logic? It is troubling that a child can kill without remorse. As much as Carl is emotionally hardened, my impression is when he put a bullet in the boy it wasn’t a sociopathic urge to kill like the Governor. Having said that, killers typically have an explanation in their warped minds for their criminal behaviors.

Throwing away the sheriff’s badge is an act of defiance against Rick. It also puts into question whether the accepted moral values before the zombie outbreak are still applicable.

As a counterpoint to the Governor’s motto of “You Kill or You Die”, Rick’s intention to assault Woodbury resulted in him bringing back children, women and seniors to care for. I liked the dichotomy between the Governor’s belief that being alive means you’ve won (in his talk with Milton) and slaughtering his followers while Rick chooses a community, “They’re gonna join us.”

Daryl’s brief line about needing people to survive hits home a lot of what this season is about. On a side note, I would have liked to have seen more Daryl in this episode, perhaps a conversation with Carol about Merle’ death would have been nice.

In Season 4, Rick’s arc is to become the father/authority figure that Carl needs; acting as a moral compass and bringing his son back from a very slippery slope. Rick has come to terms with his past traumas and understands what he needs to do moving forward so he no longer needs visions of Lori to help him.

The Andrea scenes lacked the urgency to be an effective climax to the season finale. From the moment Milton told her about the pliers she should have hurriedly scrambled to escape. I felt more for Milton than for Andrea through-out these scenes. “You need to hurry.”

The longer the torture room scenes dragged on and as it became apparent everyone from the prison group would survive, the probability of Andrea dying markedly increased.

Actress Danai Gurira’s facial expression as she watched her friend’s dying moments was more emotional than Andrea herself. It makes me curious about what happened during the past winter that cemented their friendship.

It made sense that Andrea wanted to kill herself before she turned into a walker. After Dale saved her from committing suicide in the Season 1 finale, she had to regain her will to live and eventually became a battle tested survivor. Going out on her own terms, by her own hands, says a lot about her character and how far she came yet kind of full circle. She accepted her mortality in a very different way from Season 1. My kill of the week is Andrea shooting herself in the head, which happened off-screen.

Had Andrea killed the Governor when she had the chance, she would still be alive proving that the code ensures survival albeit morally grey in some situations.

Did the season finale deliver what you wanted? How do you feel about the death of Andrea and Milton? Why did the Governor snap and where did he go? What do you want to happen in Season 4, which premieres in October?

Watch cast and producers thoughts on Inside Walking Dead Episode 3×16.