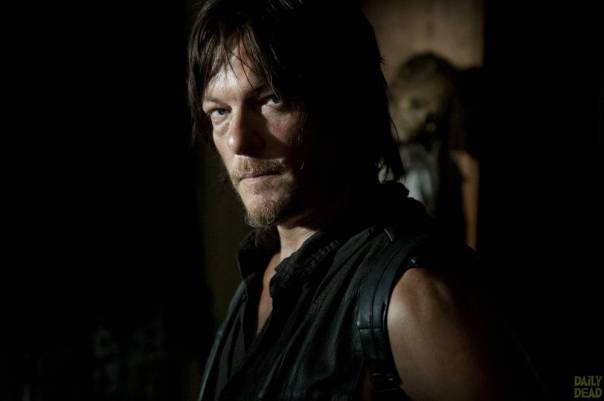 In “Still”, Daryl helps Beth on her mission to lose her alcohol virginity. Will they or won’t they, that is the question.

Four episodes into the second half of the season, “Still” feels like the calm before the storm.  “Still” is a relatively quieter, character-centric episode that mirrors the slow burn progression of the season.  Where as Season’s 3 episode 4 “Killer Within” killed off two regular characters and set in motion Rick’s arc, the pace and intensity of this half of the season hasn’t yet shifted into another gear. I enjoy taking the time to better define characters yet I’m also highly anticipating the “craziness” the show’s producers have teased fans with.

Although recent episodes have played with non-linear and overlapping timelines that offered some sort of connective tissue with other characters’ narratives, “Still” is an appropriately detached story about letting go. Letting go of the past that haunts us, letting go of our old selves, letting go the anger that eats us up inside all the while giving the middle finger. It’s fitting then that “Still” remains an isolated story that doesn’t end by crossing paths with other survivors but instead with setting on fire the kind of moonshine home Daryl grew up in.

The weakest segment of “Inmates” centered on the contrasting outlook between Daryl and Beth. While I have enjoyed character focussed episodes such as the back to back Governor’s flashback and Michonne’s dream/back story,  I was a little apprehensive to put the magnifying glass on Beth which could sorely expose her for the weak character that she may be.

Perhaps under developed would be a fairer description than weak but it’s safe to say that Beth doesn’t elicit the same emotional fan response as Maggie, Michonne or even Carol. If Beth was on the reality game show Survivor, she’d be the one flying under the radar, riding on the coat tails of stronger players. But does that make her any less of a survivor? She may not be the toughest physically or smartest but she does deserve credit for playing the cards she’s been dealt and ultimately for staying alive where many have bitten the dust.

Beth is a stronger foil for Daryl than I would have expected. She’s an emotionally available young woman whom Daryl can open up to. Beth also demonstrated a self-awareness we’ve haven’t seen much of until now and is highly perceptive on what’s going on in Daryl’s mind. Maybe it’s a little too on the nose how Beth pinpoints what fans are saying about her, like how in the post-apocalyptic world she’s still alive despite not being a bad ass like Michonne? But it’s easier to connect with a character when they acknowledge truths that are plain for viewers to see.

The whole “I need a drink” story brings to mind that Beth is at the age when she would be off at college, away from her family for the first time. The age when you rebel against how you were raised and wanting to build your own independent identity in a way you couldn’t living at home as a high school teenager. The mental survival mechanism that she’s been using to keep her mind from fully taking in all the tragedy she’s endured is shattered as Daryl smashes the bottle of Peach Schnapps. Though she’s optimistic that Maggie is still alive somewhere, Beth doesn’t have a family and home to ever go back to which is a terribly sad and lonely feeling to come to terms with.

There are conventional devices for character development which worked well for Daryl in this episode. First show Daryl as a tough, embittered, rattlesnake eating bad-ass. Then slowly peel away the layers complete with a “Never Have I Ever” drinking game and stories of a messed up childhood until all that remains is an exposed nerve ending. I personally like seeing manly men breakdown and cry. 😉 In addition to loosing his prison family, an aspect of survivor’s guilt is feeling personally responsible for those that passed away which explains his angry behavior is really a side effect of his own self-resentment.

The goal of “Never Have I Ever” drinking game, besides getting drunk, is to find out things about a person you didn’t know. Not knowing the specifics on who Daryl was before the zombies gives him an enigmatic quality. It’s the stuff folk heroes are made of where the stories or myths are grander than the actual truth. It’s a memorable moment when it pains Daryl to admit he’s a “nothing man”. A man whose never made anything of himself except as a drifter following his brother’s lead. Yet as Beth aptly corrects him, Daryl has what it takes to be the “last man standing” at the very end.

“Still” is not an episode we’ll be talking around the water cooler or list as a defining moment when the season is all said and done. The slower pace and lack of substantial developments may be a concern if I felt the producers didn’t learn a lesson from the anti-climatic finale of Season 3.  I appreciate the writers developing the bond between Beth and Daryl and giving these characters time in the spotlight, sort of like a deep breath before what I hope will be a wild sprint to this season’s finish line.

What did you like and dislike about this episode? What are your feelings on the season so far?