• T.A.H.I.T.I.: After arguably the best back to back episodes to date, the extended hiatus during the Winter Olympics put the series’ momentum in full stop. Showing little signs of rust a full month later, T.A.H.I.T.I. picks up right where T.R.A.C.K.S. left off. Aside from some on-going issues, it’s another entertaining hour of television.

• There Are Always Secrets: Because the show doesn’t build upon it’s own mythology enough, I liked how saving Skye’s life involved unravelling a part of the mystery behind Coulson’s resurrection. We got some info on where Coulson was operated on and in the process it leads to more questions, specifically what is that blue alien severed body in the tank and how will it’s blood affect Skye? I’m actually intrigued whereas the unanswered questions in “That Magical Place”, left me somewhat dissatisfied.

• How’s The Drive From Istanbul?: When Ian Quinn shot Skye in the gut it was cruel to let her bleed out in agony instead of killing her instantly and uncharacteristic of this uppity billionaire businessman to do the dirty work himself. Since shooting Skye is revealed to be part of the Clairvoyant’s master plan, is it possible the Clairvoyant also engineered Quinn and Raina to be held in custody within S.H.I.E.L.D.’s base, sort of like a trojan horse?

• Pretty Please It Is: The introduction of both John Garrett (Bill Paxton) and Antoine Triplett (B.J. Britt) initially set up a confrontation but I’m glad they were already long time friends with some of our agents and in turn were able to work together. It would be pretty awesome if Paxton becomes a regular on the show. He had the most amusing dialogue and even when he’s rough around the edges, the way Paxton delivered his lines kept him very likeable.

Triplett is taking a shine to Simmons. When it comes to relationships, the show doesn’t always do what’s expected so I’m interested in how the writers will develop this potential storyline or maybe they’ll just become close friends with a lot tension between them? 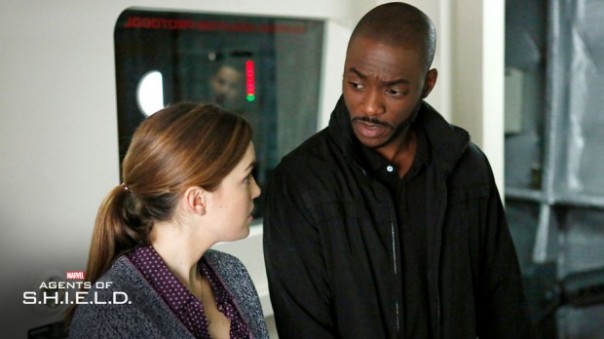 • Spirits In The Skye: If there is a reoccurring false note that is evident in this episode, it’s the supposed bond between Skye and her team mates. When Agent Coulson tells the doctor, “We’re her family”, a line I could see coming, or Simmons unable to imagine her life without Skye, it felt a little disingenuous. This is not a knock against the chemistry between the actors which I actually like, it has to do with show’s writing and handling of Skye. And when Skye’s name is brought up every time something needs to be hacked, it comes across as “this is our way of telling you she’s important to the team”.

To save Skye, Coulson risked letting the Clairvoyant see how he came back from the dead. But it’s kind of an interesting character perspective that Coulson would rather let Skye die than make her go through what he experienced.

Once the team made it to the GH mountain base, this episode kicked into another gear with a good mix of action and mystery. The introduction of Agent Garrett injected a fresh energy and he had good chemistry with everyone he interacted with. Whether the darker tone and less humour is a change in direction for the rest of the season or it’s just the producers still trying to find the right balance remains to be seen. Overall, T.A.H.I.T.I. is a good episode and the end teaser sets up what hopefully will be a fun hour with Lady Sif next week.

What did you like or dislike about this episode? Are you looking forward to Jaime Alexander’s Lady Sif next episode?