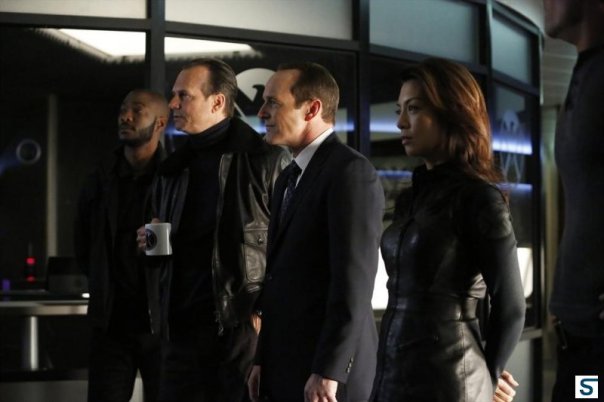 In “End of the Beginning” the Agents go to battle against super cyborg Deathlok while on the hunt for the Clairvoyant.

• Beginning Of The End: The recent run of several solid episodes in a row have been spread across a three month span. The erratic scheduling has not helped causal viewers get into the habit of tuning in each week to find out what happens next. This all changes with episode 16 which begins a 7 episode run until the season finale. Even if the last stretch continues with quality episodes and gets some cross-over interest from Captain America: The Winter Soldier movie will it be enough for the network to renew the series for season 2?

• Skye gets her badge: While not all fans have accepted Skye, it’s a nice moment to have all the S.H.I.E.L.D. agents present as she receives her official agent status. The way Skye is utilized along with her interactions with other agents are working better now in this episode than ever. You can see her influence on Simmons whom never would have thought to do some sneaky blood tests in the The Hub before learning to break the rules from Skye.

• Clairvoyant: Getting a recognizable actor in Brad Dourif (Lord Of The Rings, Deadwood) to play Thomas Nash helped sell the idea he could be the Clairvoyant. The Stephen Hawking resemblance also had me thinking it’s possible this guy could be a brilliant mastermind orchestrating everything behind the scenes. There’s been a steady build up to unveiling the Clairvoyant all season, I was pleasantly surprised to get an episode devoted to tracking him/her down. Great twist that the real Clairvoyant is still out there and doesn’t have any psychic powers, it’s just good old fashion espionage tactics.

• Agents vs Deathlok: It’s always cool to see some super powered action but not all of the Deathlok scenes were are as riveting as I had hoped. But on a television budget and a short shooting schedule I can’t really expect on all out battle. Mike Peterson is a compelling, tragic character I wish we got to see more of that side to him than jumping through a concrete ceiling. At the horse track, his jump down several stories is a callback to the pilot. There’s still humanity in Deathlok, otherwise he’d put his foot through Agent Blake.

• Spy vs Spy: Even though I know that Ward or May aren’t working for the Clairvoyant, the suspense of Fitz discovering the hidden comm line still worked for me. Fitz had me cracking up when he tries to talk his way, make that fumble his way out of the cockpit with May staring him down. The spy world is all about secrets, distrust, hidden agendas and agents who aren’t as they appear to be.  These elements along with the tone of the episode came together nicely.

After developing the Marvel universe on this television series, complete with it’s own cast of characters, super powered adversaries and overarching story, “End Of The Beginning” feels confident and focussed. There’s a greater sense that the writers know what they want to accomplish with the final run. All in all, another good episode that sets up a promising showdown with S.H.l.E.L.D. HQ.

What do you think about Ward shooting the fake Clairvoyant? Are you excited that Amy Acker (Angel, Much Ado About Nothing) is cast as Coulson’s girlfriend in an upcoming episode?