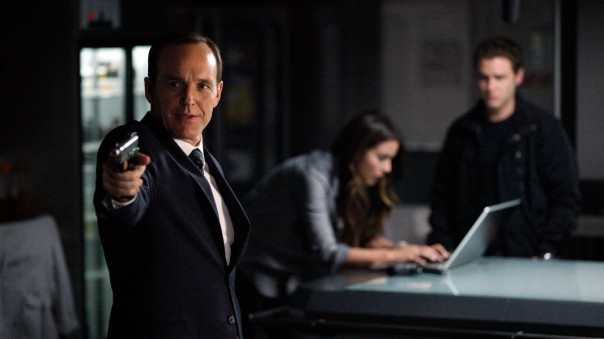 In “Turn, Turn, Turn”, the events in Captain America: The Winter Soldier shake up Agents Of S.H.I.E.L.D. Meanwhile, could the real Clairvoyant’s identity be revealed?

• Turn, Turn, Turn:  If I didn’t know there are six more episodes to follow, I’d think this could be the season finale. From beginning to end, the intensity and action is on full throttle. The stakes have never been higher while the premise of the show is turned upside down, inside out. The odd scheduling of a couple of weeks off and on, makes more sense knowing the show wanted to line up this episode with the release date of Captain America: The Winter Soldier. Captain America 2 did the initial heavy lifting, now the show can explore the aftermath of the dissolution of S.H.I.E.L.D.

• Don’t Trust Anyone:  Taking a serialized approach to the story telling allows the beginning of this episode to hit the floor running. The opening scene has all the agents forced to admit their deceptions to each other. Everyone’s been keeping secrets and what a wonderful web of tangled lies it is.

Playing off the distrust of one another added to the suspense from Simmons not knowing  if she could trust Triplett to Victoria Hand possibly being the Clairvoyant or working for Hydra. Coulson’s loyalties were never in question for me, at the same time, I could understand from Agent Hand’s perspective why she believes he’s with Hydra after listing all the reasons.

Although I correctly guessed that Victoria is loyal to S.H.I.E.L.D. her merciless and cold-blooded tactics could pass as villainy. Yet those same exact traits make her a formidable adversary for Hydra if she’s were still alive. She’s a comic book character on a comic book show so is it possible she’s could be revived somehow like Skye?

• Hail Hydra: Casting guest star Bill Paxton as Agent Garrett added a fresh energy to the team. In the back of my mind, I had a sneaking suspicion that he would be revealed to be working for the enemy but I didn’t peg him as the Clairvoyant and he never confirmed it. His behavior was pretty erratic, one moment saying Victoria Hand couldn’t be the Clairvoyant, then calling for her death, of course his reveal explained why.

Even with Hydra’s message to come out of the shadows, a tiny nitpick is that Garrett’s cover is blown after all this time by absent-mindedly letting slip a fact he couldn’t have known. The real Clairvoyant is a mastermind who would be better at compartmentalizing secrets.

After watching The Winter Soldier on the weekend, my hunch was that Dr. Arnim Zola, the scientist whose mind is contained within computer drives, could possibly be the Clairvoyant.  The Clairvoyant’s obsession with how Coulson was brought back to life would correlate with Zola, who may want to be resurrected in the flesh. With all the twists and turns in this episode, I’m not prepared to rule anything out at this point. 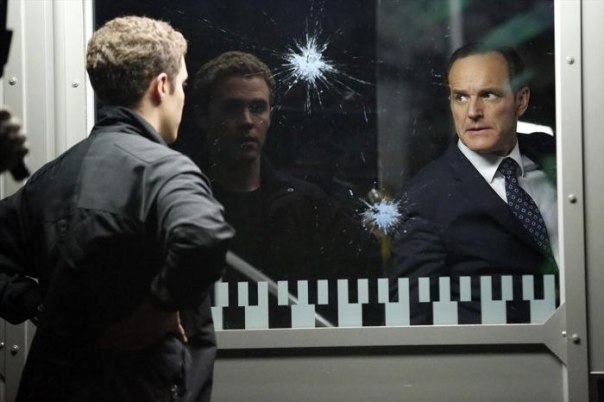 • Look Up Boring In The Dictionary: A scene that felt out of place is Skye telling Ward, “If we get out of here, let’s have drink” in the middle of a supposed life and death situation. It sucked, so to speak, much of the tension out of that scene. With Ward working with Hydra, it does put a different light on his reason for killing the fake clairvoyant last episode.

There’s a brief exchange on the bus with Ward telling Garrett what’s worth saving and he looks towards Skye. This could suggest he truly does care for her or just reinforcing his trust with Skye so she’ll would hand over the back up hard drive of classified information. After Ward asks to go to the Fridge, it tips his hand that he’s up to something. By shooting up the S.H.I.E.L.D. agents at the end, its hard not to believe he’s a traitor but this show could be setting up a very big misdirection.

“Turn, Turn, Turn” raises the bar for the series so far and there’s still several more to go before the season finale. Within the story’s break neck pace are some memorable character moments. Fitz’s teary-eyed reaction makes him that much more endearing while Coulson’s and May’s share some of their most compelling moments together.  For fans of MCU and Captain America: The Winter Soldier who are looking to find out what happens next in the battle between Hydra and S.H.I.E.L.D., the final run of episodes is set up to answer that very question, at least from our agent’s viewpoint.

What do you think about Ward as an Agent of Hydra? Where do you rank this episode among your favorites?