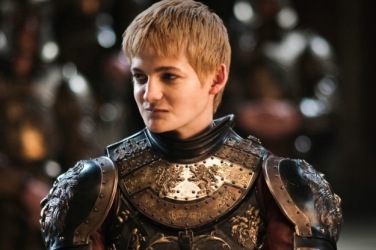 Spoilers Ahead for HBO’s Game Of Thrones, including Season Four’s “The Lion and The Rose”.

Game Of Thrones fans have taken their love of hating King Joffrey to another level. It’s become an amusing phenomenon.

The hate-fest started soon after the second episode when gifs and videos of Tyrion face-slapping Joffrey popped up on the internet. More recently in HBO’s promotion of Season Four, #RoastJoffrey was billed as the world’s first social media comedy roast of the most hated character on television. Take a look at the compilation video below of the best slaps and funniest tweets including “Joffrey is actually High Valyrian for douchebag.”

To top it all off, Sky TV in New Zealand created a fun campaign for fans to topple a seven meter tall statue of Joffrey. When fans tweeted using #bringdowntheking, a rope around the King’s neck gradually lowered the statue until it fell over.

Some of things that come out of Joffrey’s mouth are preposterous – “I’ll give him (Stannis) a red smile from ear to ear.” Other times, it’s loathsome – “I’ve considered making his (Renly’s) perversion punishable by death.”

A lot of credit goes to Jack Gleeson for his convincing portrayal of a vile, despicable monster which made it hard for some fans to separate the character from the actor.

Now that the vicious idiot boy king is finally dead, let’s take a look back at how Joffrey became the most despised, fictional character on television.

After getting hit in the face with a perfectly thrown cow pie, Joffrey’s temper tantrum ignited a deadly riot. The starving and impoverished city folk were already fuming with rage, but Joffrey’s cry to kill them all pushed them to the point of literally ripping off limbs. If it wasn’t for The Hound, Sansa would have been raped and left for dead.

Joffrey came close to choking Ser Dontos by forcing the drunk knight to drink a barrel of wine, saved only by Sansa’s quick thinking. Is it poetic justice then that Joffrey choked to death from the poison in his wine or would you have preferred something more diabolical?

• Abandoning The Battle of Black Water – “What would you have me do? What did my mother say exactly?”

The city gates are about to fall and what does Joffrey do? He runs back to his mommy leaving Tyrion to lead the defense against Stannis’ assault. We later learned that Joffrey arranged for Tyrion’s assassination during the battle. Joffrey’s distorted ego rears its ugly head again in his talk with Jamie Lannister in “Two Swords” when he takes credit for saving the city and winning the war.

• Terrorizing Sansa  – “My lady’s over dressed, unburden her.”

From partially stripping Sansa of her clothes in front of the court to threatening to serve Robb’s head to her, Joffrey is one sadistic little sh*t. On Sansa’s wedding night, Joffrey takes it a step further by describing how he’ll rape her while his guards hold her down.

• Cutting Off The Singer’s Tongue – “Tell me, do you favor your fingers or your tongue?”

Joffrey’s merciless cruelty knows no bounds after punishing Marillion for the sing-song jest about his parents – “the lion ripped off his balls and the boar did all the rest”. It’s chilling as Ser Ilyn Payne puts the hot pinchers on Marillion’s tongue and then the sound of the blade cutting through flesh is heard.

Tyrion’s name day present for Joffrey didn’t turn out as hoped. Joffrey’s a psychopath for getting his thrills by sexually torturing the whores and later for putting arrows through Ros after she’s discovered as a spy.

From the beginning, Joffrey’s been a snivelling coward. Power tripping over Michah, the butcher’s boy, and then getting beat up by Arya Stark – what a whiny knucklehead. As a result of Joffrey’s lies, Michah is killed by the Hound, Lady is euthanized by Ned and Arya is forced to part ways with her wolf Nymeria.

• Forcing Sansa To Look At Ned’s Head On A Spike – “This one’s your father.“

This deserves it own special mention as a part of terrorizing Sansa. It doesn’t get much more depraved than forcing Sansa to look her father’s and septa’s severed head. Still, Sansa manges to defiantly reply “Or maybe he’ll give  me yours” after Joffrey promises to bring her Robb’s head. Just when you think there is a shred of redeemable quality to Joffrey when he says “A king should never strike his lady” he gets his guard to beat Sansa in the face.

Robert Baratheon’s lusty loins sure gets around. Add infanticide and mass murder to Joffrey’s list of abominable acts.

• Executing Ned Stark – “So long as I am your king, treason shall never go unpunished. Sir Ilyn, bring me his head!”

Calling for Ned’s head is Joffrey’s dumbest moment. He could have used Ned as a bargaining chip to put a stop to the fighting, instead he perpetuated the War Of The Five Kings.

What would be on your list of Joffrey’s most evil moments?  Are you pleased with the way Joffrey died?