In “Providence”, the agents follow coordinates to a secret base in Northern Canada. Meanwhile, Hydra breaks into S.H.I.E.L.D.’s most secure base named the Fridge.

• Turning and Turning:  While it was expected that the decimation of S.H.I.E.L.D. in Captain America: The Winter Soldier would have major ramifications on AOS, little did most fans know that the cross over episode “Turn, Turn, Turn” had its own game-changing reveal in store.  Executive producers planned Ward’s betrayal from the beginning, making it all the more intriguing to go back to the early episodes to spot clues to his allegiance to Hydra. The shift in dynamic is not so much a reset button but one of many twists and turns in the ongoing narrative of the show.

• Agents Of Nothing:  The chitauri invasion of New York made it impossible to cover up the existence of otherworldly beings but for some reason when the series began I thought S.H.I.E.L.D. would function as a highly covert spy and law enforcement agency working mainly in the shadows. Instead S.H.I.E.L.D. is a publicly known entity with fully operational academies to train new recruits. Now that S.H.I.E.L.D. is a shell of its former self, the agency is more of what I initially had in my mind. Post-Hydra reveal, the remaining agents are identity-less “ghosts” as Skye put it, with limited resources, working around government organizations all the while fighting a shadow war with Hydra.

• Providence: After “Turn, Turn, Turn”, an episode all about distrust and betrayal, Providence explores the opposing notion of faith.  From May’s point of view Coulson’s blind faith is dangerously irrational.  In poker terms, Coulson is on a tilt after loosing everything he’s worked for yet it’s the belief that everything that has happened is leading to something meaningful that drives him to go all in by flying to the middle of nowhere with no fuel for a return flight and walking in front of the automated sentry gun.

There are also certain parallels in how belief in one’s mentor becomes a motivational factor.  Similar to how Coulson believes in Nick Fury who recruited him out of high-school and gave him the badge, Ward puts his trust in Garrett, the man who saved him from his abusive childhood. On the flip side, Raina and Ian Quinn believed the Clairvoyant to be gifted only to learn that the man behind the curtain is a con artist. The Clairvoyant is said to not like being touched so when Garrett reaches out to shakes hands with Raina does that mean the personality trait is a lie or Garrett is not who he says he is? 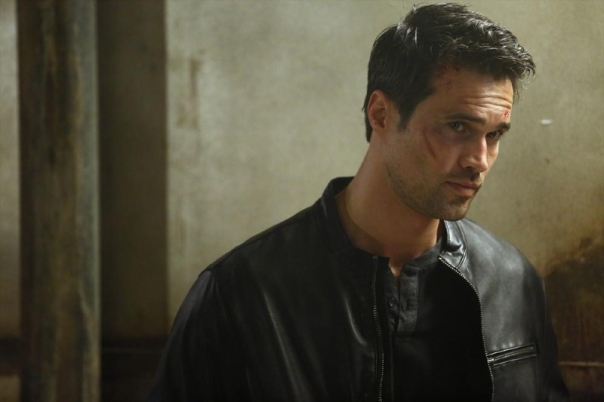 In terms of the story, “Providence” puts all the pieces back onto the board. Back in play is Raina, Ian Quinn and Graviton from episode 3. The escaped prisoners from the Fridge set up some potential roadblocks for the agents that’ll likely be explored over the next few episodes. And who would have thought Ward would be an interesting character as we’ll get to see him rejoin the team as a wolf in sheep’s clothing? Though it didn’t have the breakneck pace of the previous episode, the breathing space to let the aftermath of the big reveal to play out is welcomed.

What do you like or dislike about this episode? What do you think about Ward?