In “Nothing Personal”, Maria Hill (Cobie Smulders) teams up with the Agents while Ward forces Skye to decrypt the hard drive.

• Nothing Personal: Agents Of S.H.I.E.L.D. is in the home stretch of a back to back seven episode run. While it is premature to give a verdict on this story arc without knowing how it concludes, the show has certainly benefited from building upon the momentum of each preceding episode. The minor blip in an otherwise solid run so far is “The Only Light In The Darkness”, which missed the mark as a character building opportunity for Coulson and as a villain-of-the-week episode. In retrospect, the tangent to Portland where Coulson’s ex-girlfriend resides felt like a plot point needed to isolate Ward and Skye in the remote Providence base. Focussing primarily on the Ward is Hydra story, “Nothing Personal” is a return to a confident and tighter story like many in the second half of this season.

• Where It All Started: Coming back to the diner where Skye first met Mike Peterson at this late point in the season is like the “after” in a before and after snapshot on these characters as well as the agencies they once belonged to. In her Rising Tide hackactivist days, Skye would have jumped at the chance to uncover conspiracies and unleash secrets to the world online. Now as a former Agent of S.H.I.E.L.D., Skye’s stalling for time to prevent a hack on a hard drive containing dangerous information if in the wrong hands. This is another strong episode for Skye. She’s clever to write Ward is Hydra message that Fitz found, booby-trapped the decrypted hard drive and saved Ward even if he didn’t deserve to be saved.

• I’m Not A Nazi: The two most changed characters from the first episode is Mike and Ward. Mike has become a half cyborg nicked name Deathlok while the previously bland, cardboard cut-out Ward is revealed to literally be a cut-throat Hydra agent. If there’s a similarity that can be drawn from these two is how their perceived lack of agency has led them down a dark, villainous path which may not necessarily be their true nature. Ward’s duty to follow through on his mission and moral obligation to Garrett, something that will be better defined in next episode’s flashbacks, shapes his decision-making. As for Deathlock, he doesn’t believe he has a choice since disobeying direct orders would result in his and/or his son’s death.

• Agents Of S.T.A.R.K.: Continuing with the where it all started theme, not seen on the show since the pilot episode is Maria Hill. Even though Maria had some decent scenes in Captain America: The Winter Soldier, this episode gives us a better understanding of who she is and what makes her tick. As Nick Fury’s second in command she’s a natural leader but she’s also not afraid to quickly admit her mistakes like vetting Ward in the pilot and temporarily aligning with Glenn Talbot. Assuming that there is a Season 2, this episode as well as Lady Sif’s “Yes Men”, are good pieces to show other MCU actors how their characters could be utilized on the television series.

• Coulson’s Coffin: Special guest appearances can be tricky to pull off but having Maria Hill give the riddle about the buried information and helping Team Coulson made her feel integral to how the story played out. And the flash drive hidden in Coulson’s coffin is exactly what May needed to rebuild her trust with Coulson and give him the answers he’s been searching for. ‘Tahiti is a magical place’ was first mentioned in the pilot so it’s quite fitting to come back full circle (or is that 180 degrees). After drawing out this mystery for so long, to reveal that Project Tahiti is to resurrect an Avenger in case one of them dies and that Coulson was the man behind it is not as an impactful as it could have been. 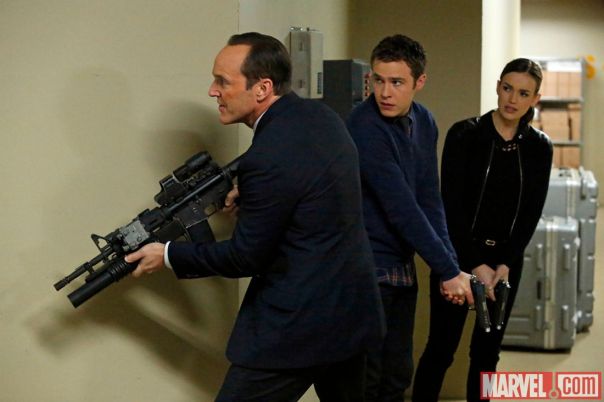 It’s hard to compete with the super powers and nobility of Lady Sif; however, Maria Hill more than held her own as a special guest character. The cornerstone of this episode focussed on Skye coming to terms with Ward’s betrayal which showcased one of Chloe Bennet’s strongest performances so far. Skye may never be a fan favorite but if she continues to be emotionally authentic and makes smart decisions it’s possible she can win over some more viewers. Then again, Skye’s dishevelled, wind-blown hair after free-falling in the car with some wonky special effects might have her detractors rolling their eyes, the same ones who complain how unrealistically perfect her hair normally is. Just one more episode to go before the finale!

Did Skye make the right decision to save Ward? What do you think about Maria Hill?

Marvel’s Agents Of S.H.I.E.L.D. Season 1, Episode 19 “The Only Light In The Darkness” Review