Battle Of The Movies: Captain America: The Winter Soldier vs Guardians Of The Galaxy (Spoiler Free)

Time to kick back and put on your favourite superhero pajamas! It’s the battle of Marvel Studios’ blockbusters Captain America: The Winter Soldier versus Guardians Of The Galaxy. After going head to head in several categories such as Story, Characters and Overall Awesomeness, we’ll turn the floor over to the all important people’s decision (that’s you!) for your pick for the best Marvel Cinematic Universe Phase Two movie of the year.

Captain America: The Winter Soldier avoids the trappings of a mindless spectacle of fights and explosions because at its core it’s a clever espionage thriller wrapped up in superhero awesomeness. As with many great spy-genre movies, a lot of tension comes from not knowing who to trust. Trust, loyalty and betrayal are big themes which are explored on the personal and political front. Because Captain America is more grounded in the real world, it’s easier to make a connection to the broader ideas of the film, in particular to people’s trust/distrust in their government. Story wise, the rug gets pulled out from under the Marvel Cinematic Universe in a spectacular manner and it’ll have lasting implications in future movies.

Only several months after The Winter Soldier hit theatres Marvel Studios premiered Guardians Of The Galaxy. If you’re not familiar with this movie, check out Guardians Of The Galaxy: Everything You Need To Know for the synopsis and why Marvel is expanding into the cosmic universe. It’s a compliment to say that Guardians feels less like a typical comic book movie and more like a Star Wars meets Indiana Jones type of sci-fi action adventure film on steroids. The story shares a common thread with Marvel’s Avengers, it’s essentially about larger than life individuals who butt heads before coming together as a team although there’s nothing generic about Guardians. Director James Gunn’s vision is bold, lots of fun and manic.  Buckle in your seatbelts because the story quickly immerses you in another galaxy, far far away, yet it’s the same universe inhabited by Captain America. Driving the story is the macguffin but what’s makes the movie entertaining are the likeable characters and how dangerous situations are subverted with humour. 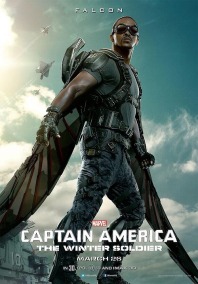 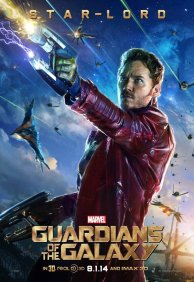 It’s the battle of the abs between Chris Evans (Captain America aka Steve Rogers) and Chris Pratt (Star Lord aka Peter Quill)! Star Lord is an 80’s child in love with 70’s music while Captain America is a World War II veteran who has ‘listening to Nirvana’ on his to-do list.  As much as both characters have adapted to their current time & space, they still don’t quite fit in which leads to some funny fish out-of-water humour.

Before Steve Rogers got his super powers he already had the true heart of a hero. On the other hand, Peter Quill doesn’t have super powers that we know of.  When we first meet Quill, he’s a selfish, brash rogue; basically a petty thief who’ll blast his phaser gun on an already unconscious enemy just for the hell of it (love that about him!). Chris Pratt is perfectly cast. His comedic timing is spot on and he has an inherent likeability that he infuses into Star Lord.  While Quill may have a more overt character arc than Rogers, both must make tough choices, testing their principles in the process.  In terms of jaw-dropping kick ass moments though, Captain America comes out on top. Chris Evans delivers a strong performance, he totally embodies Captain America’s wholesome sense of honour.

Friends for many years, the on-screen chemistry between Chris Evans and Scarlett Johansson is instant and natural. Black Widow plays off of Captain America very well and some of the best dialogue in the movie is the interplay between these two. The supporting characters in Guardians who stand out the most are tree-like humanoid Groot and gun-toting Rocket Raccoon. Groot’s abilities are incredibly inventive and so much of Rocket’s personality comes through. He’s a unique MCU character who happens to be completely CGI.

A less than stellar aspect of Guardians is in the three main adversaries: Ronan, Nebula & Korath. The actors are good in their respective roles but they lack substantial development to be considered as compelling, big-time villains. Without giving anything away, the dynamic between Captain America and The Winter Soldier is fantastic and pays off in a meaningful way. Whenever Winter Soldier comes on-screen the intensity goes up a few notches.

Guardians Of The Galaxy is a non-stop entertaining movie. It has an impressive fun factor and is great for the whole family to enjoy. Considering that Guardians has to introduce a brand new cast of characters, establish the cosmic universe and sell the idea of these unlikely misfits coming together, it’s understandable that the story itself lacks complexity. A strong reoccurring motif is how the characters learn to put others before themselves and work together. For the most part, the team chemistry is very good but their bond feels rushed at times.

An element that keeps Guardians from achieving excellence are the sentimental moments which don’t have enough breathing room to fully resonate.  Further, the villains posed a viable threat but unfortunately aren’t very memorable.  Although it’s not everyone’s cup of tea, the retro soundtrack helps establish the tone for an up-tempo sci-fi romp and has a personal connection to Star Lord. In addition to the strong character interactions, where Guardians shines are the self-deprecating /quirky comedic bits along with the fun-spirited, high-octane reckless sense of adventure.

Captain America might not have the most flashy personality but this film does a great job at highlighting his best traits. Characters that have a contradiction in their nature tend to be interesting like how Star Lord is a space cowboy with both a good heart and a bad boy vibe. For Rogers, he has a very clear belief of what is right and wrong, so had the script tried to add dimension by contradicting his morality it wouldn’t have felt true to the character. What makes Rogers compelling in this movie is how he’s a straight as an arrow soldier navigating the spy world. A world where there is a lot of deception, mysteries to unravel, his closest allies are keeping secrets and his enemies are not clear-cut.

Although The Winter Soldier doesn’t have the level of fun and break neck pace of Guardians of the Galaxy, the story has more layers, surprises and the film’s themes are timely. Visually, both movies are top-notch though the 3D effects in Guardians gets the edge. The physical confrontations between Captain America and The Winter Soldier are riveting close quarters combat, superior to the fight choreography in Guardians which is good too.

Marvel Studios put out two worthy movies this year. Differences aside, both have a strong understanding of their comic book property and Marvel chose the right approach for each.

Now the Battle Of The Movies continues with Your Opinion:

There’s lots of love for both movies. Share your thoughts and if you happen to have a favourite let us know.

Do you think Captain America: The Winter Soldier or Guardians Of The Galaxy is the better movie? Which of these two movies has the best lead character? How do you rank your top Marvel Studio movies now?