← Game Of Thrones Season 5 Premiere Q&A: Cersei’s Flashback and The Sons of the Harpy Explained
Question Of The Month: Make A Movie A TV Show →

Game Of Thrones: What You Need To Know About Dorne, House Martell and The Sand Snakes

Game Of Thrones: Prince Doran, The Sand Snakes And How Dorne Resisted The Dragon Invasion

The fiery Oberyn Martell as played by Pedro Pascal quickly became a fan favorite character on HBO’s Game Of Thrones. Many viewers are clamoring to find out if the “Red Viper” will be avenged and on learning more about the Martell family.

With one of the largest cast in television history and many story lines to service, the executive producers are selective on which new characters will be introduced and which will be cut from the show. Surviving the cutting blocks are several characters from House Martell. After sitting quietly in the sidelines, the rest of the Martell family are becoming a prominent focal point of the season and could possibly play a role in the series’ end game.

Now is a good a time as any to highlight some interesting facts about Dorne and take a closer look at Oberyn’s family, including his deadly daughters known as The Sand Snakes.

• A Brief Look At Dorne

There’s a tonne of history and background information about Dorne online. Here’s a brief overview of the bare essentials that’ll be helpful to know within the context of the HBO series:

Dorne is the southern most kingdom in Westeros. It’s a hot, desert wasteland of sand with a mountainous region in the north which forms a natural barrier from the rest of the kingdoms. It’s believed that the First Men crossed over from Essos to Westeros before the continents broke apart ages ago in the eastern area now referred to as the Broken Arm of Dorne and the Stepstones. 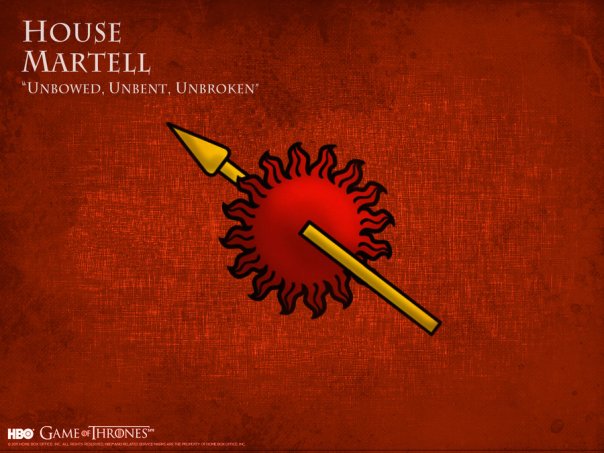 The kingdom of Dorne is currently ruled by House Martell. Their motto is “Unbowed, Unbent, Unbroken” and their sigil is a red sun pierced by a gold spear on an orange field. The symbol of the red sun represents their lineage to Princess Nymeria. Arya Stark named her direwolf after Nymeria, a legendary commander who led her people by the thousands in ships from Rhoynar to Dorne and later took Mors Martell as her husband.

A landmark in the history of the Dornish people were their ability to resist House Targaryen’s conquest. With their dragons, Aegon the Conqueror and his sisters brought many of the other regions to their knees or in some cases to burning ashes. Dorne kept their independence using guerrilla warfare tactics. They averted major battles against the dragons by hiding and abandoning their castles.

During one phase of the war, the Dornish brought down the great dragon Meraxes by piercing its eyes with a bolt of scorpion. Eventually, the Targaryens made peace and through marriage became allies with Dorne.

Beyond the spicy food, highly prized wines, deadly poisons, sandstorms and hot-headed temperament of its people, Dorne has a number of intriguing cultural differences from the other kingdoms. The Dornish are gender blind when it comes to their inheritance and succession practices. Whether their ruler is a Prince or a Princess, they follow them just the same. Bastards in Dorne are deemed as born out of passion and do not carry the same stigma as other regions. The depiction of Oberyn and Ellaria Sand is indicative of the Dornish’s open-minded views about their sex partners and taking on formalized lovers known as paramours. 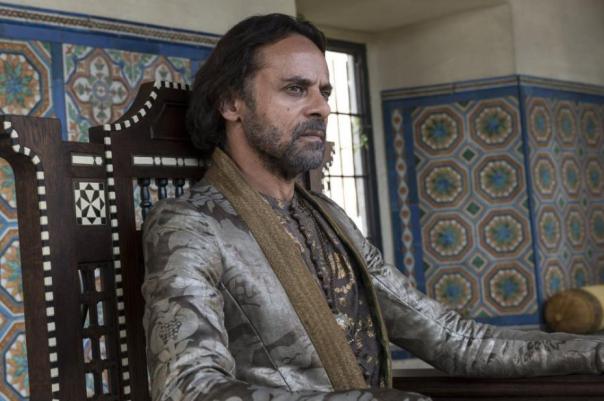 The head of House Martell is Prince Doran. He is played by actor Alexander Siddig, you may remember him as Dr. Bashir from Star Trek: Deep Space Nine. In several ways, Prince Doran is the antithesis of his younger brother Oberyn. The most noticeable difference is that while Oberyn was a physically gifted fighter, Doran is usually confined to his wheelchair due to debilitating gout. Whereas Oberyn was quick-tempered and passionate, Doran is reserved and politically cautious. Although, he may quietly share late Oberyn’s desire to avenge their murdered sister Elia, Doran is reluctant to start a war over it. He comes across as a man of both intellect and strong principles.

While leaders such as Robb Stark and Renly Barathon have fallen in the War of The Five Kings, Doran is biding his time. It’s likely he’s holding his cards close to his chest and is content on playing the long game. In season 2, Tyrion was able to keep the Martells from turning on King’s Landing by making a deal, in part by sending Cersei’s daughter Myrcella to them as their ward. For the time being, Doran plans to solidify his alliance with the Lannisters by marrying his son Trystane Martell to Myrcella. 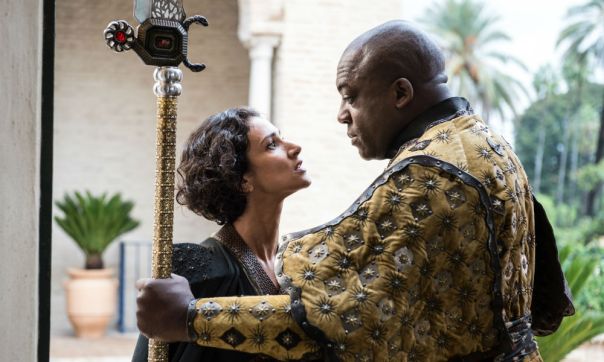 Another new character to keep an eye on is the captain of Doran’s personal body guards, Aero Hotah. Hotah is played by actor Deobia Oparei who describes his character as “stoic and represses that primal urge, so that when he does wield his axe, it is exacting.” 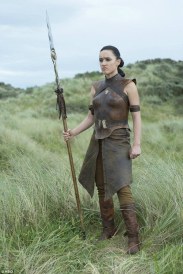 They’re deadly and they’re out for Lannister blood. Meet Oberyn’s infamous daughters collectively known as the Sand Snakes. “Sand” is the surname for Bastards born in the south and “Snakes” is a reference to their late father’s nickname The Red Viper.

Oberyn trained them in the art of combat, each with their own special weapon of choice: Eldest, Obara Sand is deadly accurate with the spear, Nymeria Sand whips it really good and Tyene Sand is proficient with the double daggers & poison.

Ellaria Sand isn’t the biological mother of all them but she is sort of their ring leader. Ellaria and the Sand Snakes are united in their goal to seek justice and avenge Oberyn Martell’s death. They see Prince Doran as weak for not moving against the Lannisters.

Did you enjoy this geek out session? Are you pleased that the show is focusing on Dorne? Which characters from Dorne you are most interested in?

← Game Of Thrones Season 5 Premiere Q&A: Cersei’s Flashback and The Sons of the Harpy Explained
Question Of The Month: Make A Movie A TV Show →