← The Tale of the Princess Kaguya (2013) Movie Review
Game Of Thrones: The Best Underrated Characters →

Game Of Thrones Season 5 Episode 9: “The Dance of Dragons” Review 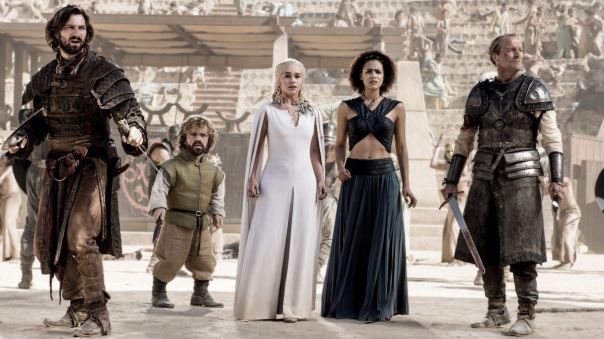 Going by previous seasons, Game Of Thrones has conditioned viewers to expect the unexpected in its penultimate episode. High expectations can be bit of a double-edged sword. It adds to the intensity knowing a regular character could get killed off and in anticipating a season defining moment. On the other hand, setting the bar high could result in a let down if that game changing event doesn’t land as hoped. The good news is that on its own merits, “The Dance Of Dragons” is a solid episode. It just happens to be in the shadows of “Hardhome”, one of Game Of Thrones’ best episodes to date. A better way to think about these two episodes is that they’re not in competition with one another, rather it’s a great one – two punch to the final stretch of Season 5.

Let’s briefly start off in Dorne. So the consequence for Bronn’s fight in the Water Gardens is getting an elbow to the face. This is fairly indicative of the Dorne story line which been been played for laughs throughout the season. Some were intentionally amusing moments like when Jamie caught a sword in his golden hand while some are laughingly bad like when the Sand Snakes fought. While this episode saw marginal improvements in getting to know the Sand Snakes, Ellaria and Prince Doran, it’s a case of too little, too late. This was a weak little rebellion by the Sand Snakes and ultimately of little significance. All in all, it’s an anti-climatic way to end the events in Dorne.

Across the narrow seas in Bravos, Arya’s scenes which started out strong at the beginning of the season are becoming less satisfying.  There has been so much time devoted in these past couple of episodes in setting up her assassination mission I’m not sure the pay off will be strong enough. Arya’s scenes are at their strongest when it brings out all the qualities we love about her: Arya’s wit, inner strength and defiance. Here, we barely get to see her speak or interact meaningfully with anyone. What I do like is that Meryn Trant has been on her death wish list. This may force Arya to choose between her path in the House of Black & White and vengeance from her past life in Westeros. Or maybe she’ll be clever enough to find a way to take out both the gambler and Trant.

In the North, my expectation for a confrontation between Ramsey and Stannis was subverted; swerving the story line into a dark “wow they really went there place“. The early part of the season was building Stannis into a character we could possibly root for, at least in defeating the Boltons. Even if he becomes the one true King, it’ll be a crown stained with his own daughter’s blood. To win the Iron Throne, it’ll take ruthlessness but it’s not a quality suited for someone to rule it justly.

The writing was on the wall when Stannis sent Davos away so he wouldn’t have opposition to burning alive Shireen at the stake. It was brutal hearing Shireen cry out, she didn’t receive the same mercy as Mance Rayder when Jon put an arrow through him. Game Of Thrones has never shied away from violence on children or infants. In the pilot, Bran got tossed out a tower window. But the impact of Shireen’s death feels especially heavy because she’s a sweet, innocent and very likable girl. Her cruel fate will be remembered in Westeros like in those stories she likes to read.

The big set piece took place in Meereen. It was a great sequence of events from Jorah throwing the spear that hit the harpy to Drogon’s epic return. One angle this season could have played up more if they had more time is if Hizdahr was secretly the Harpy. When he came late to the fights, it seemed to suggest he was planning something. That theory goes out the window after seeing him get repeatedly stabbed.

I also really liked the moments and looks between Dany and Jorah. I didn’t expect Jorah to make out of this episode alive but he’s not out of the woods yet unless he finds a cure for grayscale. When he held Dany’s hand it was a touching moment, I assume the grayscale hasn’t spread to his fingers which she touched. Dany’s “How to Train Your Dragon” sequence was cool but the visual effects didn’t quite look right and took me out of the moment.

Overall, a really strong episode. But one that doesn’t quite reach the heights of other great episode nines. My favorite character driven scene is probably between Davos and Shireen, knowing it was their final goodbye. The scenes in Meereen are undeniably exciting. There’s been hit and miss fight choreography this season but the fighting pit stuff is a solid hit. The big question is what happens next. Will Melissandre conjure up something to help Stannis in his march towards Winterfell?  How will Sansa’s storyline wrap up? Should Dany start making plans for Westeros? One more to go before this season is done!

Do you think the show went too far in burning a child alive at the stake? What did you like or dislike in this episode?

← The Tale of the Princess Kaguya (2013) Movie Review
Game Of Thrones: The Best Underrated Characters →