Sense8: The Wachowskis’ Netflix Series is Better Than Their Feature Films

“From the creators of the Matrix“, the promotional tagline to Netflix’s Sense8 series about 8 telepathically connected people around the world, is a double-edged sword. For those whose imagination was captured by the 1999 sci-fi classic, they might be curious enough to check out what the Wachowskis can do in a long form narrative. On the other hand, it’s been a while since the directing duo hit a creative peak and their most recent film, Jupiter Ascending, was critically panned.

Sense8 ranks as the Wachowksis’ strongest recent effort, not that 2008’s Speed Racer or 2012’s Cloud Atlas set a high bar. The Wachowskis and co-creator J. Michael Straczynski wisely ground the sci-fi premise in smaller, personal stories to start off the series. The sensates’ ability to mentally visit and share emotions, skills and knowledge with those they are psychically bonded with gets around the problem of disjointed storytelling which often plagued Heroes, another show about gifted individuals spread across the globe.

Sense8 hooks viewers in with an opening scene that is dark as much as it is riveting and mysterious. While there are also darker moments peppered through out Season 1, Sense8 captures a wide breadth of the human experience. The stories revolve around moments of love, humour, desire, courage as well as fear, pain and sadness in a way that feels fresh and vibrant because of the unique premise.

Most of all, Sense8 has a hopeful, aspirational message. The general conceit is that humanity is greater than the sum of its parts. Imagine no longer feeling isolated or alone.  Think of what humans could achieve if we could readily empathize with one another, literally put ourselves in another person’s shoes and altruistically give a helping hand when needed. These ideas are explored in a mostly entertaining way and as the season progresses, incorporates more action set pieces. 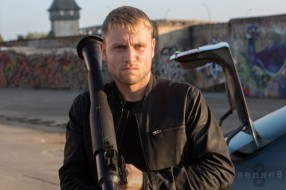 A more cynical perspective might consider that Netflix invested millions of dollars on a series featuring an international cast to help break into different global marketplaces. However, the truth of the matter is that commercially and traditionally speaking, the American lead male protagonist is still the predominant model.  Sense8’s diverse cast is a step in the right direction towards breaking down gender and ethnic barriers.

An Icelandic DJ living in London who’s troubled past haunts her (Riley), a kick-ass Korean business woman who puts her family ahead of herself (Sun), a down-on-his luck bus driver in Nairobi who needs AIDS medication for his mother (Capheus) and an Indian pharmacist engaged to marry a man who she doesn’t love but everyone else does (Kala), to name a few, are some of the central characters.

Arguably the strongest character is trans woman Nomi, who carries both the emotional weight and the conspiracy story line of the first part of the season. Lana (formerly Larry) Wachowski’s experience with gender transition brings an authenticity and a unique understanding to Nomi’s journey. Using narrative techniques, the writers quickly establish Nomi as a likeable, sympathetic character so when her mother insultingly refers to her as a he or uses her deadname, we can’t help but feel bad for her.

The unconditional love which Nomi’s girlfriend named Amanita continuously exudes further adds to the impassioned impact of her story line. As is the case with Nomi, the sensate story lines with the strongest supporting characters are often the most compelling. This holds true in Lito’s story in Mexico where there’s a playful dynamic between him and his love interests. Lito, being an action movie star, also gives the directors an opportunity to do over the top, signature slow-motion bullet time gun fighting which is partly parody but all in the name of fun. 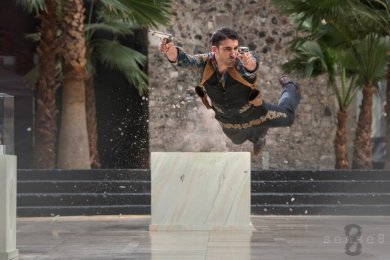 As strong as some aspects are, Season 1 is not without blemishes. Where as many new series focus on a primary point of view character to ease the viewer into the world, Sense8 dives right in with eight core characters. At times there is a struggle to balance their stories and it’s a little disorienting at first when scenes jump between the many different characters. However, after finishing the series and getting to know the characters, the initial episodes are stronger than first impressions. Further, it’s easier to spot and appreciate the finer details the writers put in on a second viewing.

Another issue is the uneven pacing, particularly in the first four episodes. There are times where some stories could use a quick injection of momentum. If the season’s over arching narrative about the sensates being hunted down was developed further it could have helped with the pace issues and raised the dramatic tension to another level. This lack of progression also meant that the show’s villain and shadowy corporation behind the hunt are not as prominent as one would hope.  On the flip side, there is plenty of room for Season 2 to sink its teeth into and expand on the greater mythology of Sense8.

The Wachowskis’ Sense8 Season 1 is a solid start to an entertaining new show, leaving room for improvement for its second season which Netflix has already announced. It’s gorgeously shot on location in eight different countries which reflects the diverse background of each primary character. And while it may not be everyone’s cup of tea, Sense8 deserves recognition for its portrayal of LGBT characters. It’s best to go into Sense8 with an open mind and if you can stick it out through the slower initial episodes, there’s a worthwhile story in store. At this time, Season 1’s rating on Rotten Tomatoes is 70% which is a little low but is a more than respectable score.