← Movie Roundup: What’s Your Favorite Jake Gyllenhaal Performance?
Gotham: Season 2 Episode 1 “Rise of the Villains: Damned If You Do” Review →

Quick Impressions on Doctor Who S9 x 1 (Full Spoilers Ahead)

Doctor Who Series 9 kicked off with a super solid episode. Before I get into what I liked and a couple of things that didn’t work in the premiere, you should know, I’m diving into this series with little knowledge of series 8. I know this is a weird place to start watching again, although I have watched series 5.

Since I haven’t been following Doctor Who on a regular basis, one of the big questions is whether this premiere is strong enough to hook me in for the rest of the series. I will say that Missy and Clara won me over pretty quickly, so I to want to see how they return after being vaporized. For me, Missy is a scene stealer. It’s fun to see what she’ll do or say next. And the interactions between Missy and Clara, particularly at the patio table with the snipers surrounding them was one my favorite parts of the premiere.

Here’s what I think made the cold open stand out. I liked how it dropped the viewer into a battle scene and made me try to figure out what’s going on. The hand mines is a cool concept which references Pan’s Labyrinth creature designs. When the soldier with the bow tries to play the hero but gets swallowed up, it sets up a great moment for the Doctor to save the day … which is then subverted into something darker.

I like idea of exploring the darker side of Doctor Who. Whereas Missy clearly resents being asked “are you good now?” by Clara and then proceeds to vaporize two security guards, we are getting to see that the Doctor doesn’t stand at a fixed position on the spectrum of good and evil. By the end of the episode, we see why the Doctor went from leaving the Davros boy to die in a mine field to coming back later to exterminate the kid himself. The episode did a good job of building up to this cool cliffhanger in a way that felt earned and really has us contemplating what the Doctor will do. Since we didn’t see the Doctor actually kill the boy, I’m wondering if the writers will throw in another curveball.

Of course not knowing much about Doctor Who’s arch enemies, the reveal that the boy was the creator of the Daleks was lost on me. I imagine it was an awesome moment for those in the know. If the Doctor had saved the boy back then, maybe all the tragedies could have been averted. I think this goes into classic storytelling, which I like, where the hero protagonist is the one who created his or her own worst enemy. 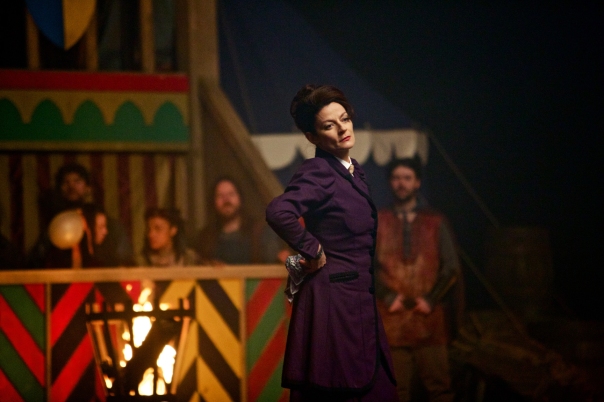 This is my first viewing with Peter Capaldi as the Doctor. I think he handles the darker and more intense emotional scenes really well.  To be honest though, the scenes where he’s supposed to be a little zany eccentric cool didn’t land as strongly. Which is a shame because playing guitar on top of a tank in a shroud of fog, should have made for an epic entrance. It also didn’t help that the medieval set didn’t look authentic.

The opening episode to Doctor Who Series 9 didn’t hold back at all. There were plenty of big reveals such as the Planet of the Daleks to neat little concepts like the planes frozen in mid-air. I should also mention the make up and effects for Colony Sarff is on point. While I’m interested in how far Steven Moffat is willing to go with the darker side of Doctor Who, I think more scenes featuring Missy would be the bigger reason for me to continue watching.

What did you like or dislike about this episode? Do you like Missy or do you find her annoying?

← Movie Roundup: What’s Your Favorite Jake Gyllenhaal Performance?
Gotham: Season 2 Episode 1 “Rise of the Villains: Damned If You Do” Review →