10 Cool Things You Should Know About Back To The Future

Back In Time – A Back The Future Documentary

Here’s my contribution to MovieRob’s Genre Grandeur – Time Travel Movies. For all the great posts in this feature click here!

Great Scott! Back To The Future is an enduring, beloved sci-fi classic more than 30 years later. 2015’s documentary Back In Time is a retrospective look on the time travelling trilogy and its present day cultural influence. Michael J. Fox, Christopher Lloyd, Steven Spielberg, director Robert Zemeckis, writer/executive producer Bob Gale and many more talk about their experience making the movies.

END_OF_DOCUMENT_TOKEN_TO_BE_REPLACED

The Flash: Season 2, Episode 4 “The Fury of Firestorm” Review

Hello The Flash fans! “The Fury of Firestorm” directly answers a big question when the cast of Legends of Tomorrow was announced with Martin Stein (Victor Garber) but without his other half Ronnie Raymond (Robbie Amell). Having a different character take up the same superhero mantle is not uncommon in comic books, yet after carefully laying the groundwork last year we are treated to a second Firestorm origin story in as many seasons.

There is speculation that losing Ronnie again could be a reason why Caitlin may turn cold sooner than later. Perhaps it’s a case of Robbie Amell wanting to pursue other roles, including a movie career. Or according to the producers, Firestorm 2.0 offers a dynamic that is closer to the comics and diversity to Legends’ superhero line up. Let’s recap what went down!

END_OF_DOCUMENT_TOKEN_TO_BE_REPLACED

Tags: The Flash Season 2 Episode 4. Review, The Flash The Fury of Firestorm Review

Supergirl Series Premiere is Set to Take Off

Supergirl series premiere packs an action filled, light-hearted punch into TV’s superhero landscape. The team behind Supergirl borrows much of the bright, breezy formula which makes The Flash a runaway hit.

END_OF_DOCUMENT_TOKEN_TO_BE_REPLACED

Boy that was an uneventful episode. Cries. The start of Season 6 is the strongest ever. Period. If last week’s “JSS” left viewers with a triumphant feeling, “Thank you” rips out your heart and stomps on it. This was a powerful episode to say the least. Judging by the online reaction a lot of fans are still in denial on what went down.

END_OF_DOCUMENT_TOKEN_TO_BE_REPLACED

Both The Flash and Arrow have a lot on their plate as they start off their seasons. In addition to setting up their own overarching story lines, the early episodes of both shows are developing characters, or in Arrow’s case resurrecting one, who will form a new team of heroes and villains in DC’s Legends of Tomorrow.

END_OF_DOCUMENT_TOKEN_TO_BE_REPLACED

If you would have told me that this week’s The Walking Dead wouldn’t resolve the season premiere’s incredible cliffhanger which had a horde of zombies approaching Alexandria, I probably would have been a little disappointed. But “JSS”, turned out to be a really good episode, providing a strong one, two punch to start off Season 6.

END_OF_DOCUMENT_TOKEN_TO_BE_REPLACED

Movie Review: The Green Inferno Has Got a Serious Case of the Munchies

END_OF_DOCUMENT_TOKEN_TO_BE_REPLACED

Hello The Flash fans! Let’s start with this episode’s final scene. One of the more enjoyable aspects over the course of last season were the intriguing pre-credit scenes with Harrison Wells. The way Harrison is reintroduced back onto the show is a nice nod to last season and a great way to start building up the mystery on who exactly is this alternate version of Wells.

As a character, Wells works best when there is a shroud of mystique around him so this longer, thoughtful approach to bringing him back into the fold is much better than if he simply was there on Earth 1 from the time the wormhole singularity first opened.

END_OF_DOCUMENT_TOKEN_TO_BE_REPLACED 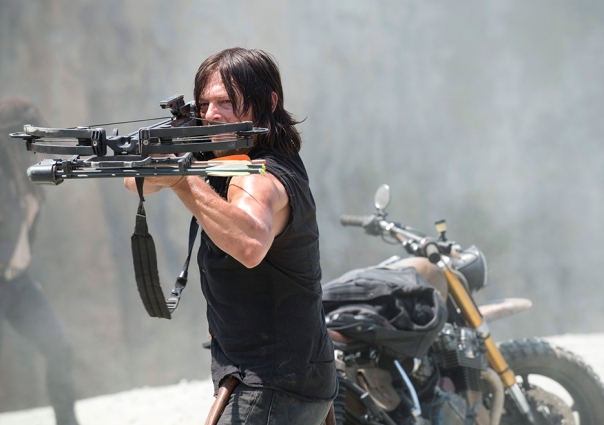 The dead are back! The Walking Dead’s 6th season premiere kicked off with a solid opening salvo, proving there’s still plenty of life in this ongoing zombie saga.

If The Walking Dead was simply about killing zombies in the most gruesome ways possible, the show would eventually get stale after the shock value wore off. Instead, it’s the evolution of Rick and co., both as individual characters and as a growing community which keeps the show from going past its expiry date.

END_OF_DOCUMENT_TOKEN_TO_BE_REPLACED

Arrow is back on track! For better or worse, Arrow and its central characters have been in a constant state of evolution. After the first season which was rooted in comic book realism, the show has since delved into mirakuru super strength, Lazarus pit resurrection and as we head into Season 4, mysticism.

Like any self aware show, the producers are able to recognize where they’ve made some missed turns and accordingly, make a number of course corrections for the brand new season.

The most noticeable change in the opening scene in “Green Arrow”, is a domesticated Oliver. Not only is Ollie smiling, he’s cracking egg omelet jokes. The lighter tone and touches of humor owes a lot to how well Stephen Amell and Emily Bett Rickards play off of each other. So much of last season was spent keeping Oliver and Felicity apart, it’s actually a relief that they aren’t bickering with each other.