Well, well, well … look who’s back? You don’t realize how much you love a character until they’re gone. The longer the show avoided addressing this season’s most talked about event, it seemed the more likely that the fan theories would be correct. This is the part where you can say “I told you so” and pat yourself on the back.

Glenn is alive and well! The opening scene showing that Glenn survived got me very excited. I’m just happy that he survived what is the closest call ever on the show.

However, there’s a lot backlash on how Glenn’s fake out death was mishandled in many different ways. There is a long list of reasons on why Glenn’s supposed death and survival doesn’t add up. It it a case of sloppy writing and the show runner underestimating their fans? I won’t breakdown all of the issues, many of which are valid points. I’ll just focus on the ones I’m most interested in talking about. 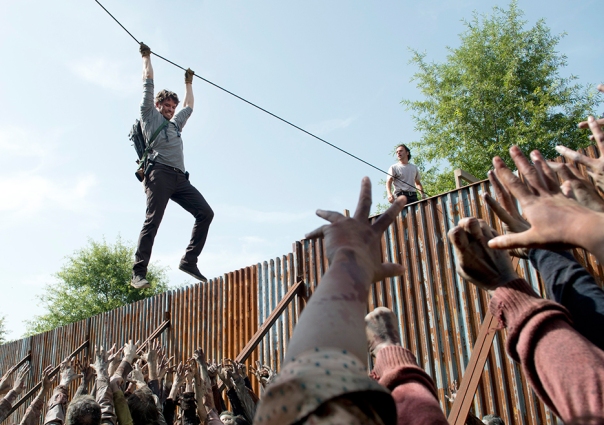 The biggest hurdle for me to get over is that it stretches beyond belief how Glenn could crawl away and hide beneath a dumpster virtually untouched with hundreds of hungry walkers around him. There have been a lot of implausible stuff  happen in the past, this is just another one to add the list. This is TV entertainment after all.

Does Glenn surviving take away from the life and death stakes of the show? There are only a few characters who I think are relatively untouchable at this point. It’s possible that a major character will die later this season. Unless we see a character die on-screen beyond a doubt and another characters sees that person die, they aren’t necessarily dead.

Because of social media and recap shows, fans are going to put their heads together and build theories. Fans didn’t like having to wait a few weeks to confirm what they already figured out. Viewers who binge watch this on home video or streaming services after the season has aired and don’t keep up with the online talk will probably have a less stronger reaction.

Glenn’s return in the opening scene is a highlight, the rest of the episode is plodding. The biggest takeaways is that a number of possible events are set up for the mid-season finale. Morgan is going to have to decide whether he can hold onto his no kill policy. Although he made some good points at the meeting, secretly keeping prisoner a wolf may come back to haunt him. Ron getting a loaded gun is not going to end well, the question is who’s going to get maimed or worse by his actions? As for Rick, he going to have to accept that Alexandrians are part of his group, he can longer keep the “us versus them” mentality.

One of the more frustrating parts of “Heads Up” is that it’s a missed opportunity to develop Enid and learn something insightful about her. She was very annoying. Talk about a high threshold for stupidity, only Glenn could put up with her antics instead of ditching her. The two make for an odd pairing, unfortunately they didn’t develop any type of emotional bond that’ll be interesting to watch moving forward unlike Aaron and Maggie’s time together.

As annoying as Enid is, the award for most stupid character of the week is Spencer. What on earth was he ninja climbing his way out over the wall? It also didn’t really make sense for his character because of what we learned about him in “Now“. Although we learned something more about Rick’s mentality, it mostly felt like the writers needed something exciting to happen to fill out the hour.

These past few episodes haven’t risen to the quality of first part of the season. It’s been a while since we got an episode that featured most of the cast, but “Heads Up” fell pretty flat. This episode was book ended by two really good moments, the stuff in between spun it’s wheel until the final moment when the watchtower collapsed.  The wall breaking down should hopefully set up an intense mid-season finale.

How do you think Glenn’s fake out death was handled? What are your predictions for the mid-season finale?