Game of Thrones: Season 8, Episode 4 – “The Last of the Starks” Review 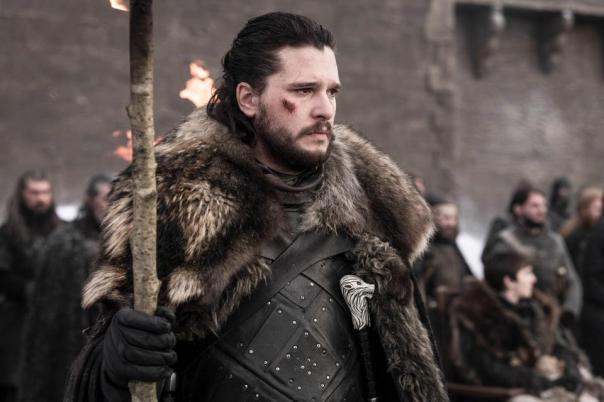 In these last couple of seasons, more than ever, HBO’s Game of Thrones is popular entertainment, aimed to please the masses. Now, there’s nothing wrong in offering viewers an enjoyable drama and fantasy to take our minds off our daily lives. But when HBO’s Game of Thrones was at its peak, it subverted our expectations in ways that were surprising yet also offered interesting angles to explore the plot twist’s significance. These story lines were also supported by well thought-out character arcs that made sense and therefore were satisfying.

When the show runners announced there would be two shortened final seasons, there was a rush to tie-up many loose ends and make disparate pieces fit. Arguably, the White Walkers were treated like a loose end to be tied up so that the focus in the final episodes would be the show’s primary dilemma, the battle for the Iron Throne. The White Walkers represented an existential threat to humanity. A threat that has now been stopped. What does this mean for the show?

It’s possible that the White Walkers are purposefully a secondary conflict. As times passes in Westeros, the White Walkers will go back to being mysterious creatures only talked about to scare young children during bedtime stories. Magic and dragons will also fade into distant memory. And old stories into myth. What will be left are threats that are all too real: Tyrants, corrupt governance and the dark side within all of us. The realm that Varys talks about isn’t precisely the seven kingdoms, it’s a concept concerning the shared sacred values that bind people together.

Game of Thrones final episodes are about answering specific questions. What does it take to be a successful conqueror? What are the qualities for a wise ruler? Does the person who doesn’t want power is the most deserving of it? How should people be governed and how to remodel the succession of power? Dany appointed Gendry as Lord of Storm’s End and in-doing so she broke Westeros customs. She did it for her own calculated benefit. But what happens when she starts making decisions that come at innocent people’s expense? It’s ironic when Dany says that her destiny is to rid the kingdoms of tyrants when has the makings of a tyrant herself.

“Last of the Starks” is about pushing Dany to the edge of madness by taking away just about everything she cares about. She no longer has the best claim to the throne and the secret is out of the bag. She can no longer love Jon the way that she desires because Jon believes in telling the truth about his identity to his family. Even if Dany wins the Iron Throne, the North will always see Jon as their true King. Jon has won over the hearts and loyalty of the people. Sadly, her child/dragon Rhaegal and dear adviser Missandei were killed. Dany is given good reason to go scorched earth on King’s Landing. But if she does, she would be no different than Cersei who’s using the people as her personal shield. Of course, we haven’t seen yet how far Dany will go to win the Iron Throne.

As a side note, in the books there’s significance to the fate of the dire wolves as it relates to their master. Not sure what it means, if anything, that Ghost is going off with Tormund up north where he’s most at home. On the show, it’s technically demanding to shoot the wolf scenes so that could explain why Ghost appears and disappears without much explanation. Jon is ice and fire; wolf and dragon. Rhaegal is named after Jon’s father, Rhaegar. Hopefully, Rhaegal’s upsetting death is not a bad omen for Jon as he heads for King’s Landing. By the time the North arrives in King’s Landing, will they be fighting with or against Dany?

Jon has a way of ending up in places where he doesn’t feel like he belongs. Likewise, Bronn’s scene feels out of place. Perhaps that was his last significant scene which tried to encapsulate Bronn’s self-serving, mercenary ways one more time. What’s unusual is Brienne smiling a lot … after being emotionally vulnerable for the first time her heart gets crushed. Although Brienne thinks Jamie is leaving to be with Cersei, it’s more likely that Jamie wants to put a dagger into Cersei’s belly. And shouldn’t Euron be suspicious about who’s the true father after hearing Tyrion talk about Cersei’s children?

“Last of the Starks” provides a really good balance between entertainment and raising interesting questions to examine. Going in, there was a worry the episode would be too much table setting after last week’s big battle. But the surprise deaths of Rhaegal and Missandei immediately raises the stakes again. By putting Dany into an emotional and unpredictable state of mind, the last war might have some twists in store. Maybe Dany’s instinct to go full force on the Red Keep back in Season 7 was the right call? If she did that, she might still have all her dragons, Missandei and won the Iron Throne with the healthy mindset to rule it, all in time to deal with the Night King. Dracarys.

Posted on May 6, 2019, in Game of Thrones and tagged Game of thrones. Bookmark the permalink. 2 Comments.