Review: The Terror Season 1 – Horror takes on many forms and faces 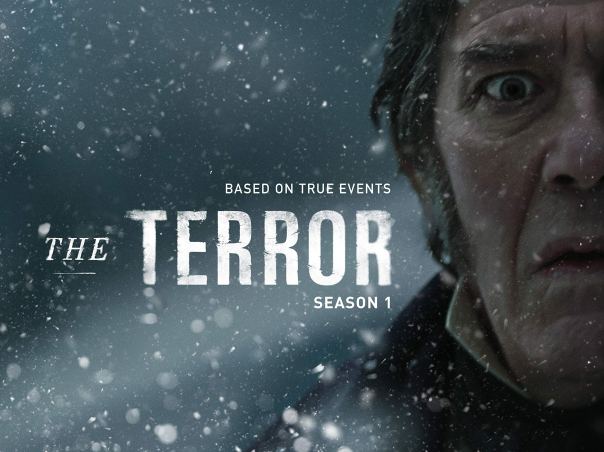 After finding a huge audience with The Walking Dead, AMC wanted more horror based shows in their line up. AMC’s The Terror Season 1 is a great start to hopefully a successful horror anthology series. The Terror’s primary approach is crafting unique horror stories centered on real-life historic events that are shrouded in mystery. Because of the solid writing and steady pace, the tension is sustained throughout the 10 episode season. Further, the cast is fantastic, including recognizable actors from HBO’s Game of Thrones, Rome and Chernobyl.

Based on a novel, The Terror Season 1 is the fictionalized depiction of Captain John Franklin, Captain Francis Crozier and crew of HMS Eerbus and its sister ship HMS Terror on their ill-fated attempt to navigate the icy Northwest Passage in 1845-1848. The ships were abandoned and none of the crew members lived to tell what happened.

In 2016, the remains of the long-lost polar expedition ship HMS Terror was discovered off the coast of King Williams Island. The Terror Season 1 takes into account certain historical clues and hypotheses on what may have happened and fills in the rest of the details with an inventive, fantastical story. Imagination is a source of creativity as well as fear.

At its core, The Terror Season 1 is a survival horror set in the frozen Arctic where nature doesn’t provide much in the way of game to hunt nor hospitable living conditions. It’s partly British hubris to risk over a hundred lives on a three year expedition to try to navigate the Northwest Passage, though it also shows an admirable pioneering spirit. This remote, desolate location is where the unknown lurks in the thick fog, beyond the boundaries of human knowledge. The dull color palette is drained of vitality, enhancing the moody Victorian era atmosphere. 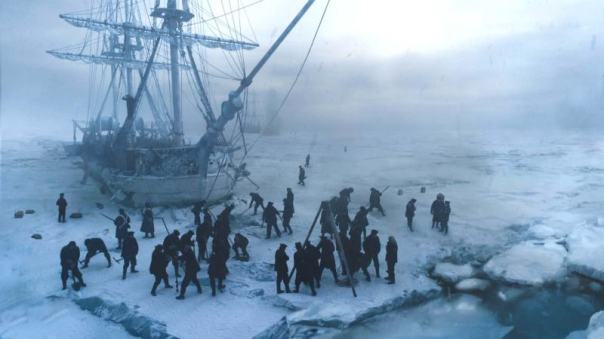 There are reoccurring themes in The Terror Season 1 that are worth briefly noting. On one level, the story conveys the effects of the Royal Navy on the Inuit people they come across. There are also intermittent flashbacks to life back in British civilization. These flashbacks flesh out the motivation to key characters as well as provide a stark contrast to their predicament in the Arctic. Like their ships trapped in ice, civilization provides structure and safety but is very rigid and slow to progress. Living in a highly regimented society demands a level of individual sacrifice. Although the ship’s crew have a command structure, away from civilization they are constantly facing threats to their organization and capacity to work together. And in the face of extreme, dire situations, the most depraved aspects of humanity can be unleashed.

This may sound very dark albeit many characters and their relationships are a bright spot. Each of the actors are a great fit for their characters. The instantly likable Dr. Harry Goodsir (Paul Ready) is compassionate and morally grounded. He’s an anatomist, not a medical doctor, who’s trying to figure out why the crew is developing unusual symptoms. Captain Francis Crozier (Jared Harris), a natural leader, has been overlooked through his career because of his Irish heritage. He has every reason to be bitter yet he harbors no resentment to others. Captain John Franklin (Ciaran Hinds), commander of the expedition, is impetuous. A likable quality is that he’s maintains a good rapport with his right-hand man Captain James Fitzjames (Tobias Menzies). Menzies has stronger material here than as Edmure Tully on Game of Thrones.

Each of the characters have personal flaws or memorable traits. We see them in a different light as the season progresses. Some character motivations are nuanced. Its good that the writers don’t force feed the audience every detail. Even for the supporting actors that don’t get that much screen time, when they get chance to deliver a monologue they nail it every time and their character becomes all the more compelling. This is a very masculine show. The way these men relate to each other feels genuine. For the female actors, Nive Nielsen is impressive, she has great facial expressions as Lady Silence. There is also a minor subplot featuring Lady Jane Franklin (Greta Scacchi), based on her real-life counterpart, that involves her celebrity connection and political influence.

In extreme arctic conditions, attempting to get your hand unstuck from a cold metal pole might just rip off your skin. The Terror Season 1 has its share of gore, depravity, and things that must be seen to be believed. It’s also a fairly sophisticated, engrossing story filled with many compelling characters. The acting talent runs deeps, it’s a shame that the ensemble cast will likely be overlooked in the Emmy nominations, although Jared Harris may get recognition for his work on HBO’s Chernobyl. The production quality is very respectable and the writing features some themes that are there to be examined. As an anthology series, it’s great that each self-contained season can be enjoyed as its own complete story. For horror fans, it’s worth checking out The Terror Season 1.