← Review: Spider-Man: Far From Home is far from spectacular
Is Joker the Origin Story we need? →

It’s often said that Stranger Things is a highly bingeable show. I totally agree. I watched multiple episodes of Season 1 and Season 2 at a time. For Season 3 I limited myself to only one episode per night and sometimes a few days break in between. I don’t know for sure if pacing myself changes the enjoyment level. It definitely wasn’t a bad thing to stretch out a great season over a few weeks. There’s also something to be said about allowing an episode to sink in and build up the anticipation for the next chapter like traditional TV viewing.

Season 3 catches up with where the characters are at in the summer of ’85. After returning from camp, Dustin feels distant from his childhood best buds. Eleven and Mike’s relationship is heating up and protective surrogate father Chief Hopper wants to put a damper on it.  Joyce is thinking about moving out of Hawkins. No longer high-school students, Nancy and Jonathan get a job at the local newspaper while Steve serves up ice cream at Scoops Ahoy in the new shopping mall. With his make-shift radio tower, Dustin intercepts a mysterious message.

Everything that makes Stranger Things a thrilling, coming of age, lover letter to the 80’s is back and in fine form. Like previous seasons, the balance between spooky supernatural horror that effortlessly transitions to personable, charming moments is spot on. You can tell that The Duffer Brothers mapped out the season with careful thought and detail. There’s hardly a scene that is ineffectual. Every episode supports the on-going story development with a good mix of action, horror, and lighter moments.

Adding to this season’s 80’s nostalgia is the new shopping mall Starcourt. I find it ironic that small Mom and Pop stores in Hawkins are closing down due to the mall while in current times malls are losing business due to online purchasing. Gotta love the “trying on clothes” montage at the mall – this show knows how to the please the audience in way that stylistically fits Stranger Things framework.

Season 3 focuses on the cold war angle with direct references to the 1984 film Red Dawn. In the 80’s, as well as other decades, many movies tapped into the tension between America and the Soviets. Strangers Things mostly has fun with these ideas like how Erica’s love for capitalism means knowing what she’s worth and getting as much free ice cream as she can.

Splitting the characters into smaller groups, each with their separate yet connected story lines is a great way to manage a huge cast. All of the story lines are entertaining and I really liked the chemistry among the groups. Steve and Dustin’s banter is a highlight. Where some shows would write off the ex-boyfriend, Steve is actually getting better material than Jonathan and the actor Joe Keery is underrated. It’s funny when new character Robin, Steve’s Scoops Ahoy co-worker, asks “are all your friends children?”

If I had to pick one character that had the best moments it’d be Chief Hopper. He can usually fight his way through problems but the writers this season put him up against a formidable foe. He’s also funny when facing problems which can’t be solved by physical force, like parenting and dating dilemmas.

Max and Eleven’s immediate bonding, even though they had some tension at the end of Season 2, worked for me maybe because it’s nice to see Eleven have some fun at least for a little while like a “normal” teenager. Eleven is integrated with the core kid group this season making for a cohesive story line. Her ability to essentially spy on people from afar, whether it was intentional or not, thematically ties into the cold war paranoia.

One of my favorite subplots is Will coming to terms that his childhood has come to an end. Logistically, since the kids are growing fast the writers can’t keep them in the basement playing D&D forever lol. I think one of this season’s themes is about change. Some characters embrace it better than others. From a present day perspective, we can see that the culture and values of that time are about to change in a big way. The writers work this theme into several different story threads that becomes more apparent as the season goes on. 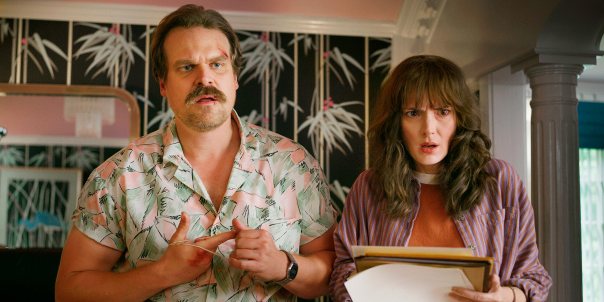 I do have some nitpicks. Wyonna Ryder’s slightly exaggerated acting works better when she’s in emotional pain when Will was missing or endangered. Playing up the comedy angle doesn’t quite fit into Ryder’s strength. On the other hand, David Harbour is pitch perfect in capturing the humorous side to Hopper. They don’t create characters quite like him anymore. I also wanted some stronger characters moments for Lucas. To be honest, his little sister had the memorable lines. His on again, off again relationship with Max ended up overshadowing Lucas at times rather than refining the best parts of his personality.

There are too many other characters and story beats to mention. And since I’m trying to keep this mostly spoiler free I’ll wrap this up. I’m interested in where Stranger Things will go from here and how the Duffer Brothers will end this series, at most there will be two more seasons from what I’ve heard. Season 3 of Stranger Things shows that there is a lot good story left to tell.

← Review: Spider-Man: Far From Home is far from spectacular
Is Joker the Origin Story we need? →