← 5 Ways To Improve Netflix’s The Witcher

What I appreciate about director Sam Mendes’ war drama 1917 is that it has all the urgency, suspense and sense of brutality you’d expect from a World War 1 film without glorifying war itself. The focus of 1917 is not on a particular battle or military campaign but on the harrowing mission of two British soldiers, Lance Corporal Blake and Schofield, to deliver a message through enemy territory to save a battalion of 1600 men, including Blake’s older brother, from being massacred. I didn’t mind at all that the story is straightforward, light on dialogue and has only two lead characters. Where 1917 shines is in its immersive direction, hauntingly beautiful cinematography and earned emotional moments.

I’m not that well versed in the first World War or movies based on it. From what I understand there are previous movies, mostly older ones, that graphically depict the horrors of trench warfare. Many conscripted men literally died in their own excrement. There are also times in the trench where not a whole lot happens. Because of the deprivation, soldiers lose track of what day of the week it is as mentioned in 1917. Mendes’ screenplay doesn’t dwell on the grisly aspects. It doesn’t sanitize it either. Rotting bodies are strewn about and giant rats feast on them. Despite the heavy subject matter, I didn’t feel drained or depressed. Much needed breathing space is interspersed between the action which gives the film a great flow. In fact, 1917 is touching and poignant in places. I really like the emotional journey 1917 takes us on.

The two lead actors are cast well for their roles.  Dean-Charles Chapman naturally captures Blake’s youthful innocence. Blake hasn’t yet experienced the harsh realities of war while the older Schofield has already earned a medal in a previous engagement. George MacKay as Schofield skillfully expresses a wide range of emotional subtleties. Schofield is not in it to be a war hero. He is driven by friendship, honor and duty. The candid dialogue between Blake and Schofield feels realistic. I like that the characters’ fast thinking decisions and actions help develop their bond quickly and form the film’s emotional anchor. As a result, very little time in the screenplay is spent conversing about the character’s personal life back home. The supporting cast consisting of Mark Strong, Benedict Cumberbatch, Colin Firth, Andrew Scott are solid in effective short scenes. Richard Madden (Robb Stark from Game of Thrones) is excellent here as well in a brief role. 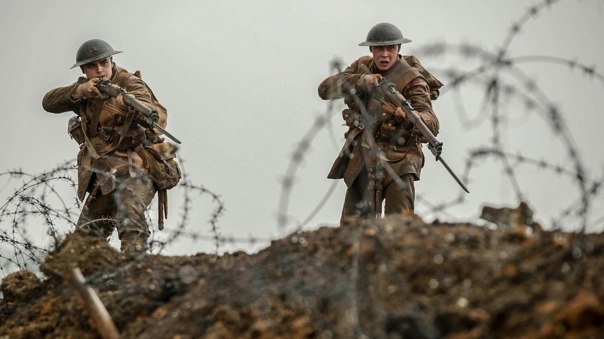 Despite some obvious spots where I suspect an edit was made, Sam Mendes’ directorial approach to make 1917 appear as one continuous-shot is fairly seamless. The set designs and screenplay must have been built around this concept from the beginning.  Typically the use of multiple camera angles can be used to convey important information to the viewer. A single camera shot can be a limitation, but Sam Mendes finds different ways to use it as a strength. A single camera can build suspense because you can’t see what is just off frame. And when the camera is placed behind the shoulder of a character it gives the feeling that you are holding your breath for something surprising to happen. It’s also used for an impactful reveal as the camera turns back around to show what has just happened. Even a simple shot of characters walking through a trench without any edits emphasizes the trench’s length and makes you feel confined like how the soldiers must have felt. It wasn’t until I read the credits (at home) and noticed that the cinematographer is Roger Deakins who also worked on Blade Runner 2049 and Skyfall among other visually impressive films. 1917 features a memorable sequence involving light and shadows that is quite mesmerizing to watch.

Some reviewers have described the one-shot effect as both a strength and a gimmick. I don’t personally feel that the continuous shot is dishonest although I’d concede that the passage of time in the film doesn’t sync up. The movie is 2 hours in length but the film’s story takes place over a day or so. Further, sometimes having big stars in minor roles can pull the audience out of the movie-going experience. It wasn’t an issue for me seeing the star actors except maybe Cumberbatch because I keep thinking of him as Sherlock and Dr. Strange.

1917 is about delivering a message. Life has many twists and sometimes you end up having to deliver other important messages that you never intended. Messages are a fragment of a bigger story. Even in dreadful circumstances, we tell stories to another to provide solace, perhaps a little hope and to show us how to make things right. There are other war dramas with more epic action and complex stories. However, 1917 is still a highly recommended film. It’s one of 2019’s (wider release in Jan 2020) most visually compelling films and has a notable musical score.

← 5 Ways To Improve Netflix’s The Witcher