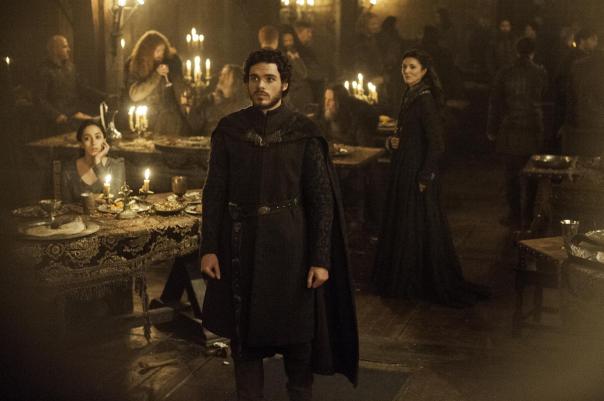 Winter is here and it’s a nice day for a red wedding! Only read this article after watching HBO’s Game Of Thrones Season 3 Episode 9 titled ‘The Rains of Castamere’.

OMG! My heart is racing after watching the best episode of the season. The sh*t went down this episode. What a horrific massacre! If you have not read the books, let me know if you are in shock, in disbelief or maybe shed a tear?

Where do I even begin? Firstly, I’d had some issues with Robb’s relationship with Talisa in Season 2 but I’ve come around, in particular the last couple of episodes which showed off their undeniable chemistry. For some fans, their love may be overly sappy, but it only served to heightened the tragedy of the Red Wedding. Talisa didn’t get her throat cut. She was stabbed repeatedly in the womb shortly after naming her unborn baby ‘Little Ned Stark’ if it’s a boy. That’s just pouring salt on the wounds, well played Game Of Thrones producers.

Michelle Fairley did a fantastic job in this episode. It’s incredibly gut wrenching as Catelyn begged for her son’s life, watched Robb get stabbed to death and slit Walder Frey’s wife throat. Frozen in shock, Catelyn stares without blinking at what went down which adds to the horror when her own throat gushes with blood.

Another thing that I did not expect was to get some resolution between Robb and Catelyn at the beginning of the episode. It’s nice that Robb finally acknowledged his mistakes in not taking Cat’s sound advice and asks her opinion if he should sack Casterly Rock. I’ve always thought Cat was a strong underrated female character. She could have stayed hidden underneath the tables and die without a fight but she took the situation into her own hands. Cat also figured out what was about to happen when the musicians started playing ‘The Rains of Castamere’ and discovered Roose was wearing chain mail at a wedding banquet but it was a little too late. 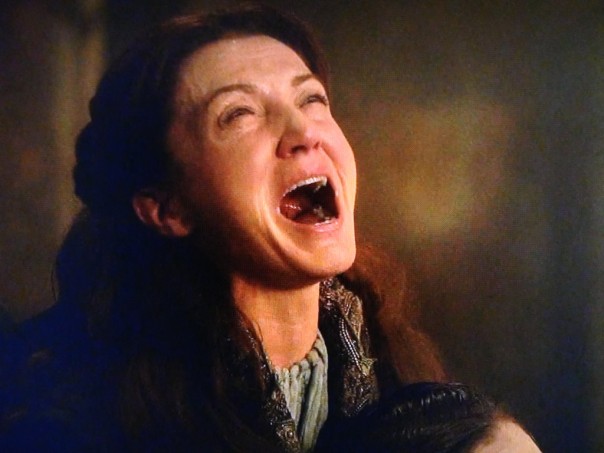 One apprehension I had going into ‘The Rains of Castamere’ was that the confrontation with Walder Frey was not set up enough in the previous episode; there was only a brief line about the delay in reaching the Twins would be seen as a slight. However, this episode did not feel rushed to me and greatly benefited from concise story telling. Because we haven’t seen Walder Frey since Season 1, it was great to get a juicy scene where the old man rubs it in when asking Robb to apologize to his daughters and treating Talisa like a piece of eye candy. As he introduces his daughters, Edmure winces at whom might be his future bride which is terrifically amusing.

Focusing on fewer story threads that intersected with each other made this episode stronger, something the producers should consider in Season 4. For the first time all season Bran’ story line had some meaningful development which is a shame it’s taken so long since he’s surrounded by several fascinating characters. After saving Jon as the direwolf and silencing Hodor, Bran proved he can step inside the skin of animals and humans at will, which should make for some exciting adventures beyond the Wall. I wonder if this is the last we’ll see of Rickon, Osha and Shaggydog in a long time?

I don’t have much to say about Jon’s story line other than I would have liked to have seen more of him and Ygritte together. They are one of the best duos on the show. After stabbing Orwell, the look on Jon’s face expresses how dark he’s become; he’s not that innocent young man that took the black in Season 1.

My other favorite duo on the show right now in Arya and the Hound. The exchanges between the two are priceless with Arya picking apart the Hound with her words. Poor Arya, just when she’s about to be reunited with her family all hell breaks loose. She watches Grey Wind get shot with arrows in confined quarters which mirrors what’s happening to Robb inside the dining hall. With no family and home to go back to things aren’t looking good for Arya, as if they ever did. The Hound showed his morality for saving Arya from entering the castle, even while knowing he wouldn’t get a reward from the Starks. Whatever their adventures leads next, it’s going to be great watching these two interact.

As for Dany’s story line, I was surprised to see an extended fight sequence with Grey Worm, Daario and Jorah versus the guards which easily could have been done off screen like a lot of other battles on this show. I was initially a bit skeptical of the casting of Daario but the actor does have a good chemistry with Emilia Clarke. Looks like things are heating up between the two and Jorah’s jealousy might get in the way. 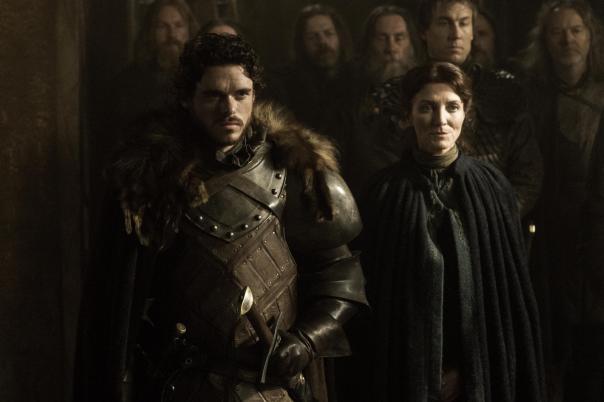 With so much going on in each episode, sometimes I overlook the music. In this episode the music is especially great from the opening scene to the ending. It’s worth rewatching this episode just to appreciate the musical score of Ramin Djawadi. Cutting to the the end credits in complete silence is a smart choice that leaves the viewers with their own thoughts and heightened emotions.

“The Rains Of Castamere” Side Notes

• When the Starks arrive at the Twins they immediately eat bread and salt supplied by the Freys which is a sacred rule. Bread and Salt are a staple of Westerosi culture and courtesy. They are the physical manifestation of the guest-right tradition, whereby anyone who receives such in a castle, inn, or home cannot be harmed while under that roof. [source]

• At the end of the wedding night the ritual of “bedding” occurs. In this ritual, the men carry the bride up to her wedding bed, undressing her along the way and making rude jokes; any maids and mothers in attendance carry the groom up under similar circumstances. [source]

• “The song ‘The Rains of Castamere’ immortalized the destruction of House Reyne by Tywin Lannister. House Reyne was obliterated after they rebelled against their liege lord. By the end of the rebellion, Castamere had been put to the torch and all members of House Reyne executed. The title is thus a play on words, as the “rains” fall over the empty halls of the “Reynes” who have been killed to the last man.”[source]

• “Some wars are won with swords others with quills and ravens“. In scenes with Tyrion, Cersei and Queen of Thorns throughout the season, Tywin is seen writing letters at his desk. Tywin has been plotting the Stark’s demise with House Frey and the Boltons. “The Red Wedding was the direct result of their correspondence, which saw Robb Stark betrayed and murdered along with the vast majority of his host, effectively ending the war with House Lannister the victor”.[source]

• According to author George R.R. Martin, “The Red Wedding is based on a couple real events from Scottish history. One was a case called The Black Dinner. The king of Scotland was fighting the Black Douglas clan. He reached out to make peace. He offered the young Earl of Douglas safe passage. He came to Edinburgh Castle and had a great feast. Then at the end of the feast, [the king’s men] started pounding on a single drum. They brought out a covered plate and put it in front of the Earl and revealed it was the head of a black boar — the symbol of death. And as soon as he saw it, he knew what it meant. They dragged them out and put them to death in the courtyard.

The larger instance was the Glencoe Massacre. Clan MacDonald stayed with the Campbell clan  overnight and the laws of hospitality supposedly applied. But the Campbells arose and started butchering every MacDonald they could get their hands on. No matter how much I make up, there’s stuff in history that’s just as bad, or worse.” [source]

Dialogue To Die For

• Gilly (confused look): “You know all that from staring at marks on paper? … You’re like a wizard.”

• Arya to the Hound: “Someday I’m gonna put a sword through your eye and out the back of your skull.”

Did this episode meet your expectations? Are you upset that House Stark is destroyed and several major characters died, including Grey Wind, the fiercest direwolf? What do you want to happen in the season finale?