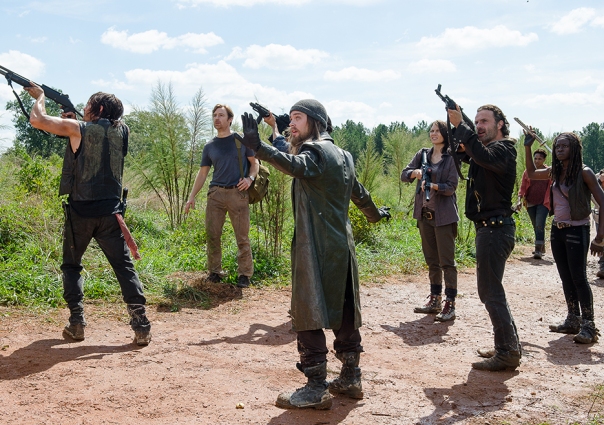 Rick and the gang arrive at the Hill Top, makes new enemies (Spoilers Ahead)

“Knots Untie” has a lot of elements brewing under the surface. While this episode doesn’t come to a boiling point we can see that the introduction of new characters and a settlement are building towards a pay off by season’s end.

“Your world is about to get a whole lot bigger” sums up where Rick’s group and the show are headed. Over the seasons Rick’s group have gradually moved onto progressively bigger settlements from Hershel’s family farm to the prison and now Alexandria safe zone. The idea that there are multiple communities out there opens up new ideas that the show can explore. The rebuilding of civilization is a logical extension from the “how to persevere your humanity in the post apocalypse” formula which the first five seasons have played out. 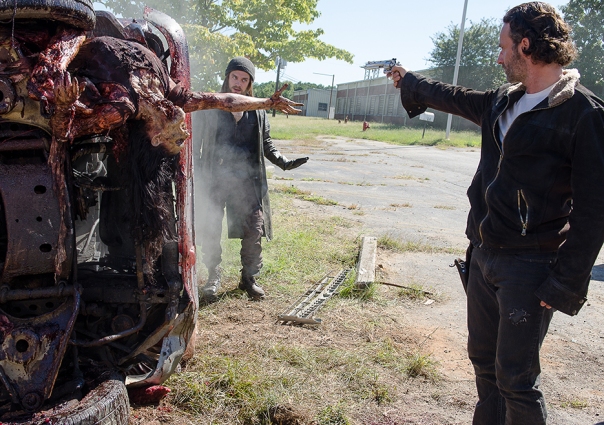 Rick’s group already know their place within the greater community or at least they think they do. At the height of their confidence, they see themselves as the top food chain predators. A lot of this episode’s plot points are about showcasing how bad-ass Rick’s group are compared to others. First off, Rick’s top guns are all on the road trip to the Hill Top colony. It’s been a while since we’ve seen the “A-team” all on one mission together. Usually on missions, the show pairs a strong, capable fighter with some weaker links to help sell the idea that they could be in danger.

In “Knot’s Untie” there wasn’t much doubt that whatever danger Rick’s group came across they would easily overcome it. Without breaking a sweat they rescued Jesus’ friends who were cowering behind furniture and Rick did not hesitate to stab the man in the throat as soon as he had the chance to. And they don’t have any fear of Negan’s saviors. Daryl has already taken out a bunch of them single-handedly which he kind of boasts about. Now imagine if Daryl had the “A-team” with him against The Saviors, he’d think it would be overkill. Mission accepted! Heck, they walked away from the Hill Top with a deal that gets them half their supplies.

At this point Negan is like a boogeyman. He’s not seen nor heard yet the stories people tell about him conjures a fearful expression. This way of building up Negan is tricky to pull off. He’s still only a name that is mentioned several times which wouldn’t mean anything to those who aren’t familiar with the comics. We do learn a few more pieces of information about Negan which helps to build him as a possible big threat. But until we see the man in the flesh, he’s more of a mythic type figure used to put fear in the meek.

Like a boss herself, Maggie stepped up in a big way. We already seen Glenn take on a leadership role. It’s nice seeing Maggie take charge for a change and use her wits to bargain with Gregory. This is a much better way to utilize Maggie than having her trapped on the guard post for an entire episode or two. As for Gregory, actor Xander Berkeley does a good job at capturing that smug, distrustful demeanor. Something is off about a guy who orders their guests to bathe before they can be in his presence. Gregory is a shady counterpoint to Jesus whom has rightly earned Rick’s trust through his actions. Having a trustworthy Jesus as the conduit helps establish that the Hilltop isn’t going to be just another evil place like The Terminus. 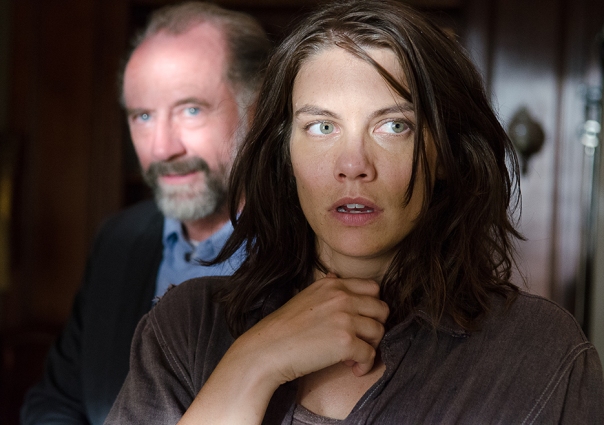 The episode started off with some Abraham scenes. How bad is the zombie apocalypse when his toughest decision is settling on Rosita or trying to get with Sasha lol? We can understand why Abraham is drawn to Sasha. She challenges him in a way that Rosita doesn’t. And Sasha has an inner darkness that Abraham relates to compared to Rosita’s sweetness. Subconsciously, Abraham already knows what he wants, in his most intimate and near death moments all he sees is Sasha.

As for the show’s new relationship, the way everyone found out about Michonne and Rick is well handled. The group was probably more surprised to find the two of them together than seeing Jesus sitting on the steps. It’s also nice that this reveal to the group was done without dialogue and that Rick is openly affectionate with Michonne instead of trying to keep their relationship under wraps.

“Knots Untie’ is another set up type episode where its focus is on putting pieces into play and establishing the groundwork for future story lines. Sure it can be written off as “not that much happens”. But there were some good characters moments such as Maggie’s scenes and Jesus is proving to be a solid addition to the cast. Abraham’s scenes weren’t as strong as hoped but at least he’s getting some screen time. The overall vibe is pretty hopeful, especially with the group passing around the ultrasound image of Maggie & Glenn’s baby. Can’t help but to think that the group’s good fortune is about to run out.

Are you interested in the Hill Top colony? Do you think the group is underestimating the Saviors or they are rightly confident?