The Walking Dead Season 3 Episode 3 “Walk With Me” Review

The Walking Dead Season 3 Episode 3 titled “Walk With Me” is a tightly executed hour of suspense and apprehension. There’s a feeling of anxiousness because as an audience we know very few things in the world are as they seem on the surface. This episode solely focused on Michonne and Andrea. Through their eyes, we are introduced to the small town of Woodbury and the man-behind the curtain who is only known as the Governor.

Let’s dissect this episode! Continue reading for my gut reactions and spoiler filled thoughts on another great episode.

The mysterious helicopter that appeared in season 1 & 2 makes a spectacular crash landing. Maybe there are other helicopters?

Curious minds prevail over precaution as Michonne and Andrea investigate the wreckage only to find another group of survivors doing the same thing.

Much like the opening scene in the season premiere, the lack of dialogue added to the tension as the duo silently hid in the grass.

Michonne’s survival instincts kicked in; decapitating her walkers to avoid being discovered. We later learn that Michonne may have had a personal connection to her neutered pets. (Not that kind of connection! Eww.). 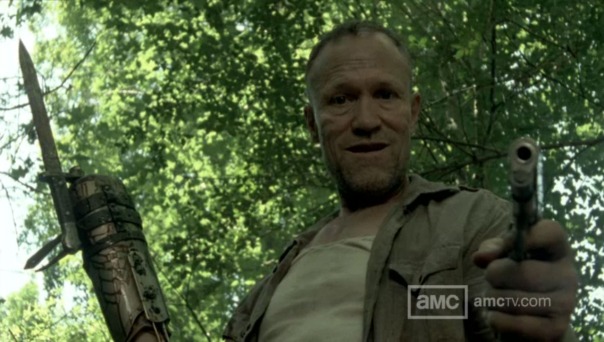 A stump-mounted dagger replaces the hand Merle cut off in Season 1. Gone are the over-the-top racist slurs (which thankfully we didn’t have to hear this episode). This is a toned down version of Merle; but still menacing and unstable.

Merle did make sense though when he said they should be most concerned with someone who has his hands in his pockets (ie. doesn’t appear dangerous). This is advice Andrea should take to heart when talking to the seemingly hospitable Governor.

“Always the sweet one, my baby brother Daryl.” It’s interesting what Merle thinks of his brother because the Daryl we know is tough as nails.

Andrea did the best job she could telling Merle they went back for him, praising Daryl, listing the names of people she’s lost, and trying to relate to him (“They left me too.”). She knows how Merle thinks, but she’s clueless to what’s really on the Governor’s mind.

As the layers begin to peel away, the ocean pearl is revealed to be a rotting onion.

Living in Woodbury provides a false sense of security; making its citizens obedient and malleable. People are assigned duties to give them purpose and to keep their minds from questioning their leadership.

There is no core group that governs the community, just one man who calls the shots. When you think of it, it’s similar to how Rick makes life and death decisions on the behalf of his followers. But at least Rick doesn’t deceive his people.

Merle is a wild alpha dog, so when he acquiesces to the authority of the seemingly mild-mannered Governor it speaks volumes.

So why did the Governor keep Merle, Michonne and Andrea alive? They were all isolated, vulnerable and could be easily controlled. Merle was on death’s door when he was discovered and now he is loyal, for the time being, to the person who saved his life.

On the other hand (no pun intended), the military men posed a huge threat to his leadership and thus Woodbury. (Why didn’t the military shoot back during the ambush?) I don’t think of the Governor as inherently evil, though his actions are immoral, anymore than Rick is for trapping the prisoner in the courtyard last episode. Does living in a zombie filled world bring out your true nature? I like to think everyone on this show has shades of grey, even the walkers – victims of the virus, which we learn may have small traces of their original self.

In this world, the Governor has to make immoral choices to ensure the survival of his people. Or is he driven by the need for power and control? Where Rick draws the line in the sand is different from the Governor, so it will be compelling when the two hopefully cross paths.

The helicopter pilot’s head floating in the aquarium is a haunting visual image. Are the heads trophies, representing his ruthlessness? Or a reminder of the horrific acts of transgression; crimes he would never have committed in the time before the virus outbreak?

What do you think of the Governor? Do you consider him truly evil? Is Andrea a little too eager to join Woodbury and give her trust to the Governor? Did you miss Rick and the gang?